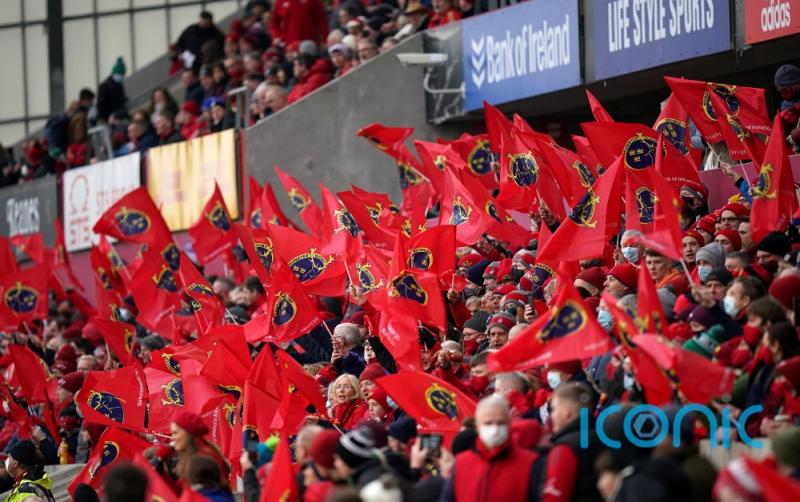 Munster Rugby fans have hailed the lifting of Covid restrictions on capacity crowds in Ireland.

Sunday’s European Champions Cup game against Wasps in Limerick was one of several weekend sporting fixtures that could proceed without Government limitations on numbers.

Munster increased capacity for the match from 5,000 to 16,000 in response to Friday’s announcement on the easing of Covid curbs across Ireland.

The quick turnaround prevented a return to Thomond’s full capacity of more than 25,000, but supporters on the famous West Terrace were still delighted to have more company than expected on Sunday afternoon.

Imelda O’Grady was unsuccessful in the original ballot for tickets.

She said she was thrilled to get a second chance for a ticket when the capacity was increased.

“I had first got that infamous email that says you were not successful in the lottery, so I was thrilled,” she said.

“It’s amazing that we’re almost back to full capacity.”

“A lot of people know that it’s now about personal responsibility, we have to let people make up their own minds,” she said.

“So I’ll continue wearing my mask and I know others will too.”

Gail Kennedy travelled 200km from Dublin for the game.

“It’s great for the occasion because the empty stadiums weren’t a great spectacle or a great atmosphere,” she said.

“So being back on the West Terrace with my friends, I’ve been coming along to matches with them for 10 years now, it’s a fantastic experience.

“It was great to have the matches at least on TV, but it’s not the same.”

Tony O’Grady said he was happy to see more supporters in the ground.

“It’s great to have more people with me today,” he said.

“I’ve been blessed I’ve been at every match during the restrictions because I’m a season ticket holder with Munster supporters club but we are blessed to see 16,000 fans here today.”

He insisted he felt safe in the stadium.