TV channel, team news and everything you need to know about Ireland v England 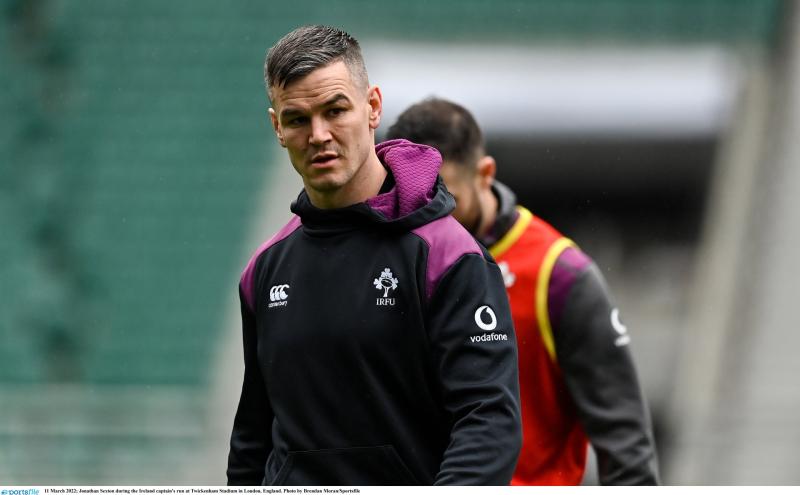 Captain Johnny Sexton has been restored to Ireland’s starting XV as part of six changes for the match with our old rival.

Andy Farrell’s men must beat their title rivals at Twickenham to remain in contention for Six Nations glory.

Where to watch the game?

Supporters will have to wait until 4.45pm to catch the game when it kicks off in London. RTÉ 2 coverage gets underway at 4pm and they will show the full match live from 4.45pm. It will also be available to watch on the RTE Player.

Ireland have lost four of their last five matches against the old enemy but won their most recent outing in the Six Nations last year, running out 32-18 victors.

Leinster fly-half Sexton came off the bench during the 57-6 round-three win over Italy after missing the defeat to Grand Slam-chasing France with a minor hamstring issue.

The 36-year-old, who this week signed a contract extension and announced he will retire following next year’s World Cup, regains the number 10 jersey from Joey Carbery to win his 104th cap.

Centre Robbie Henshaw joins Carbery in dropping to the bench, while Michael Lowry, Mack Hansen and Ryan Baird have been omitted from Farrell’s matchday squad

Lock Iain Henderson is back among the replacements after a positive coronavirus test ruled him out against the Italians.

Ireland have lost five of seven away matches under head coach Farrell, including a pair of emphatic Twickenham defeats in 2020.

However, they triumphed in their last meeting with Eddie Jones’ men, finishing last season’s tournament with an impressive 32-18 success in Dublin to condemn their opponents to their worst campaign in Six Nations history.

Returning loosehead Healy will pack down alongside Leinster team-mates Dan Sheehan and Tadhg Furlong on the occasion of his 115th cap, with vice-captain Ryan overcoming an adductor issue to join Tadhg Beirne in the second row.

Caelan Doris has retained the number eight jersey ahead of Jack Conan. He will once again be flanked by Peter O’Mahony at blindside and Josh Van Der Flier at openside.

James Lowe continues on the left flank following his two tries against Italy. International newcomers Lowry – who claimed a debut brace in the Azzurri game – and Hansen make way for full-back Keenan and right wing Conway.

Scrum-half Conor Murray returns to the bench in place of Craig Casey, where he is joined by forwards Rob Herring, Dave Kilcoyne, Finlay Bealham, Henderson and Conan, plus Carbery and Henshaw.

Like Casey, Ulster pair Kieran Treadwell and James Hume also drop out of the 23 following cameo appearances last time out.