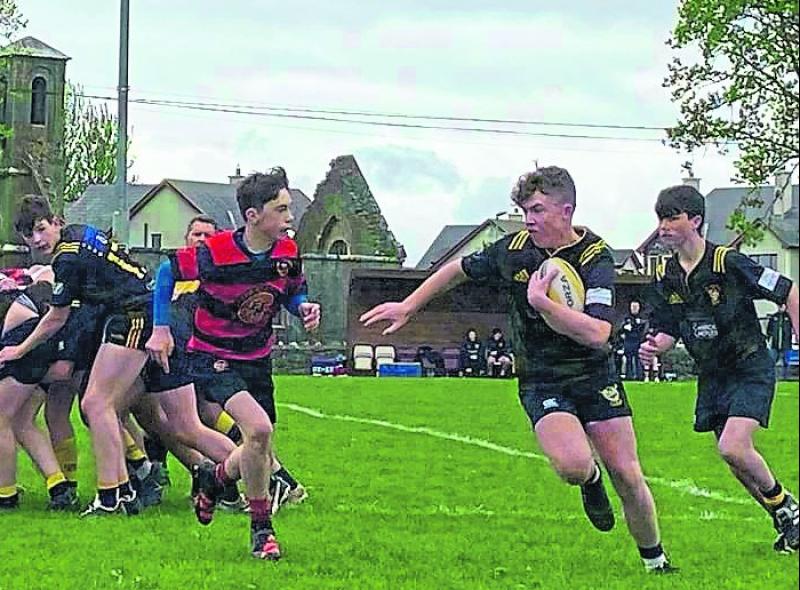 Niall Stenson from the base of the scrum, picking and going at the Monivea defence

Carrick on Shannon U15s are the Connacht Plate champions after overcoming Monivea on a scoreline of 36-19 last Sunday at Creggs.

In some sense the scoreline flatters Carrick as Monivea only settled into the game after they had given away a 14 nil lead but when Monivea did settle they put up a stern test. At crucial times of the match however the Carrick defence was fully focused in keeping Monivea at bay.

On four minutes after some lovely running rugby Cathal Enright settled Carrick nerves with a try duly converted by Peter Moran. Then on eight minutes Bobby Hanrahan crossed for another converted try and Carrick were rolling.

Monivea knew they had to score next, which they did after Dylan Wynn crossed the line with the try converted by Conor Curran. However Carrick replied in the best possible way when Enright scored a converted try to leave the score at 21-7 but just before halftime Carrick were down to 14 men after a yellow card offence.

Monivea took full advantage of the Carrick sin binning when early in the second half Ronan Glynn crossed for a try but unfortunately for them the conversion was missed. Monivea did not deal effectively with the restart and from the ensuing play conceded a penalty which Moran coolly converted.

After being restored to 15 men Carrick grabbed the game by the scruff of the neck with Eoin Davis and Enright touching down with Moran converting the latter try.

Monivea scored a consolation try converted by Cian O'Brien which left the final score 36-19 to the Carrick boys.