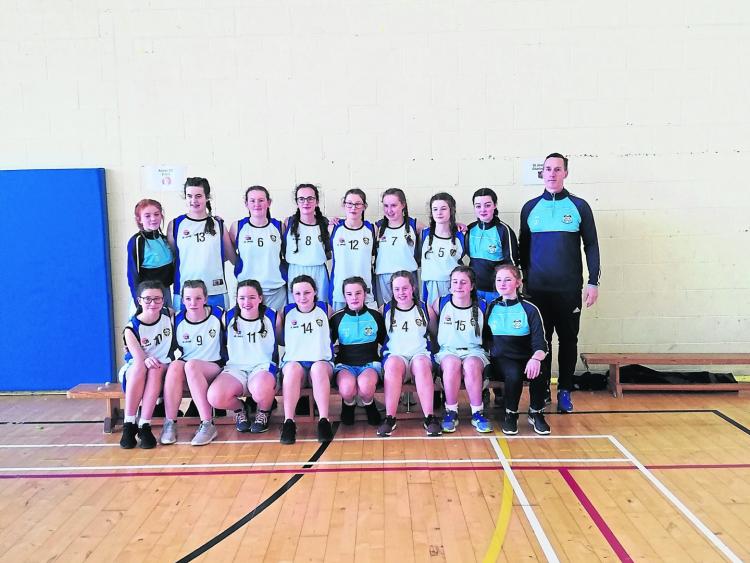 Game No. 2
Abbey Community College 41 v St Mary's Dundalk 37
The unfavourable draw meant that we were straight back on court again after a 30min break.
St Mary's proved to be a much more difficult opponent and coupled with the previous game and journey, it seemed to be affecting the girls performance and we were quickly 5-0 behind.
A time out got things focused again and Aisling Feely found her range with 10 wonderful points but this was clearly going to be a close contest and the quarter finished Abbey College 10 v St Mary's 12.
The 2nd (20 v 20)and 3rd (26 v 26) quarters followed a similar pattern with little to separate the teams as we entered the final decisive 4th quarter.
The girls showed great skill, determination and fitness to close out the game and progress to the final winner takes all game v Baltinglass.
I. King (4), C. O'Dowd, A. Roddy, A. Lannon (1), A. Feely (18), G Rooney, A. Kennedy (4), K. Roddy, C. Sheerin (2), C. Cregg (12), B. Mulrennan, T.Casey, S. McGrath, M. Casey, S. Conheady, K. Murphy

Game No. 3
Abbey Community College 34 v Baltinglass 35
The final game of the day resulted in a winner takes all match to qualify for the All Ireland semi-final in Tallaght on April 30.
What an outstanding game it was with two very evenly matched teams. Baltinglass stormed into the game with some outstanding play from their centre who had 6 points on the board without reply in the first two minutes.
However the Boyle girls didn't panic and worked their way back into the game with some fine shooting from Aimee Roddy (2), Aisling Feely (4) and Isabelle King (1) to finish the quarter Abbey college 7 v Baltinglass 9.
The second quarter resembled the first with little between the sides. Clodagh Sheerin scored a wonderful basket from a fast break to level the game and for the remainder of the quarter both defenses were on top.
Caoimhe Cregg was fouled while scoring and nailed her free throw and another Sheerin score made it Abbey College 14 v Baltinglass 17.
The third quarter was dominated by Baltinglass who were scoring some excellent baskets.
The Boyle girls were struggling to deal with the outstanding Shauna Cahoon who had 7 points scored and Baltinglass had gone into a 10point lead.
During a time out for Boyle some strong words were spoken by both players and coach and it was stressed how important it was to never give up.
The girls responded brilliantly with scores from Feely and Cregg to reduce the deficit to 7 by the end of the quarter. Abbey college 18 v Baltinglass 25.
It was now or never for the girls who promised to leave everything on the court and give it their all. And this they certainly did.
Scores from King and two from Feely made it a one point game. Baltinglass responded with two points of their own from Cahoon.
However the Boyle girls confidence was growing and three points from King and a basket from Feely resulted in Abbey College leading by 3 with time nearly up.
Unfortunately Cahoon responded brilliantly, sinking a three pointer to bring the game to extra time finishing 29 v 29.

Extra time:
Three minutes of extra time to decide who would make the semi final. Feely scored first but Baltinglass responded. Kennedy scored but again Baltinglass responded.
33 v 33 with only 1 minute to go. Feely scores from the free throw line to make it a one point game, Baltinglass respond with a free throw of their own, 34 v 34.
20 seconds left and this could go either way. Baltinglass are on the attack at as Cahoon drives at the basket and she is adjudged to be fouled.
Two free shots, she scores the first, and misses the second but time runs out for the Abbey College girls and it's heartbreak Abbey College 34 v Baltinglass 35.
A one point defeat, the cruelest margins of all and the season is over.
However these girls must be commended on their never say die attitude and are a credit to the school.
I. King (6), C. O'Dowd, A. Roddy (2), A. Lannon, A. Feely (15), G Rooney, A. Kennedy (2), K. Roddy, C. Sheerin (4), C. Cregg (5), B. Mulrennan, T.Casey, S. McGrath, M. Casey, S. Conheady, K. Murphy.