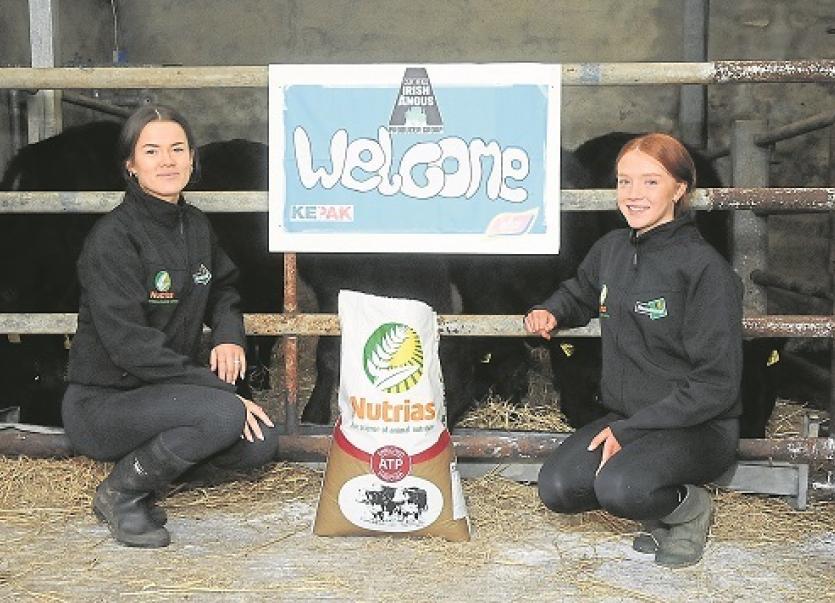 George Washington once said “Agriculture is the most healthful, most useful and most noble employment of man.”
Two students from Carrick-on-Shannon Community School are about to find out just how true this is as they embark on an 18 month journey of raising five cattle.
It's early days for Grace McKeon and Jane Carty but so far so good as they begin the manual and basic care of the Irish Angus calves.
The girls took delivery of the calves last week after they were announced as finalists of the Certified Irish Angus schools’ competition earlier this year.
Certified Irish Angus, in conjunction with its processing partners ABP and Kepak, runs the competition to educate second-level students about the care and attention required to produce Certified Irish Angus beef while also inspiring students to consider the Irish agri-food industry as a valuable career choice.
The role being undertaken by these young women cannot be under estimated - both girls are extremely busy with school and work while Jane plays football for her local club Shannon Gaels and Grace plays for Allen Gaels.
They told the Observer “During the week it will be hard to find time to mind the calves especially during term time but we will make up for it on weekends.”
The calves are being reared on the farm of Jane's family, owned by her father and mother Joe and Fionnuala at Knockroe, Boyle.
But the good news is that Joe will be on hand to help out during the week and no doubt the girls' farming backgrounds will also stand to them.
They also see this as the perfect time to take on this work as “it is a great distraction from Covid and will help takes our minds off of it.” 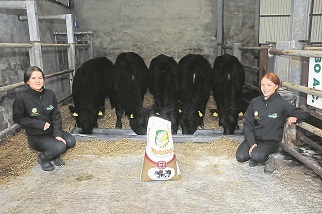 Carrick-on-Shannon Community School fifth year students Grace McKeon from outside of Drumshanbo and Jane Carty, Knockroe, Boyle pictured on the farm run by Jane's parents, Joe and Fionnuala where the five Angus calves will be reared over the next 18 months Pictures: Willie Donnellan

Jane from Knockroe, Boyle and Grace from outside of Drumshanbo were introduced to the competition by their Agricultural Science teacher in Carrick-on-Shannon Community School, Ms Louise Gallagher who they say gave them great help and support throughout this competition.
The pair entered the Certified Irish Angus schools’ competition last November when they created a short video clip for submission.
In this video they outlined the importance of farm health and safety - which was their chosen theme - the advantages of Certified Irish Angus Beef, as well as their ideas on how they would promote the Angus breed to farmers and retailers alike.
They quickly progressed to the second stage of the competition where they were interviewed by members of the Certified Irish Angus Producer’s group, ABP and Kepak and were then chosen from a large volume of entries to go forward to the next stage of the competition which took place in Croke Park in March,
There they again had to showcase their ideas for a second time.
“We were delighted to be informed in April, via social media, that we had been selected as one of the five finalist teams, and would be awarded with five Irish Angus calves for rearing.”

Farm Safety project
Jane and Grace outlined to the Observer “Our project focuses on Farm Safety with the simple idea of an emergency contact sheet for farms.
“The sheet includes essential phone numbers including, the local doctor, vet, fire brigade and the name and contact details for neighbouring farmers.
“Quite often when an accident happens on a farm, farmers turn to their neighbours for help. They might need a tractor or a trailer, they could just need an extra pair of hands. If you lose your phone in a pit you won't have access to your neighbours' numbers.
“We feel it is very important to have these numbers to hand. A number of local farmers have already taken the idea and brought it to their own farms.
“As part of our project we also visited the local primary schools and gave a presentation on farming, advantages of the Angus breed and health and safety on the farm.
“We paid a visit to a local Irish Angus beef farm and gained a greater understanding of farming with the Angus breed.”
What is next in the competition:
“We were delighted to finally receive our calves after working so hard on our project all year. We are going to continue with our project based on health and safety on beef farms. We will return to Croke Park in a year and a half in the hope of obtaining an additional cash prize award of €2000.

Thank you
The girls would like to sincerely thank Kiltoghert Creamery who kindly sponsored jackets and one tonne of meal for the calves.