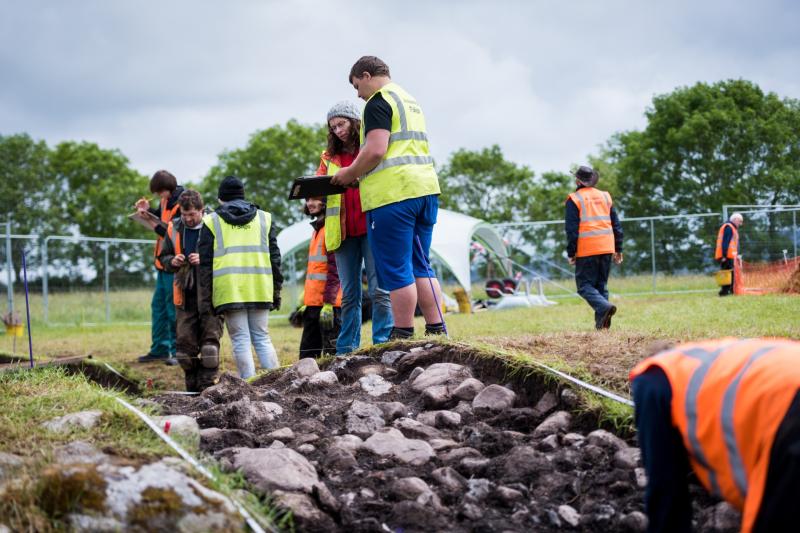 The dig at Carrowmore megalithic tomb.

A team of archaeologists from IT Sligo have just completed a two-week archaeological excavation of a prehistoric monument in the heart of the Carrowmore megalithic complex, Sligo.

Carrowmore is the largest cemetery of megalithic tombs in Ireland, with 5,500 year old passage tombs dating from 3,600 BC.

IT Sligo archaeologists Dr Marion Dowd and Dr James Bonsall directed the excavation of a site that was formerly known as a barrow. 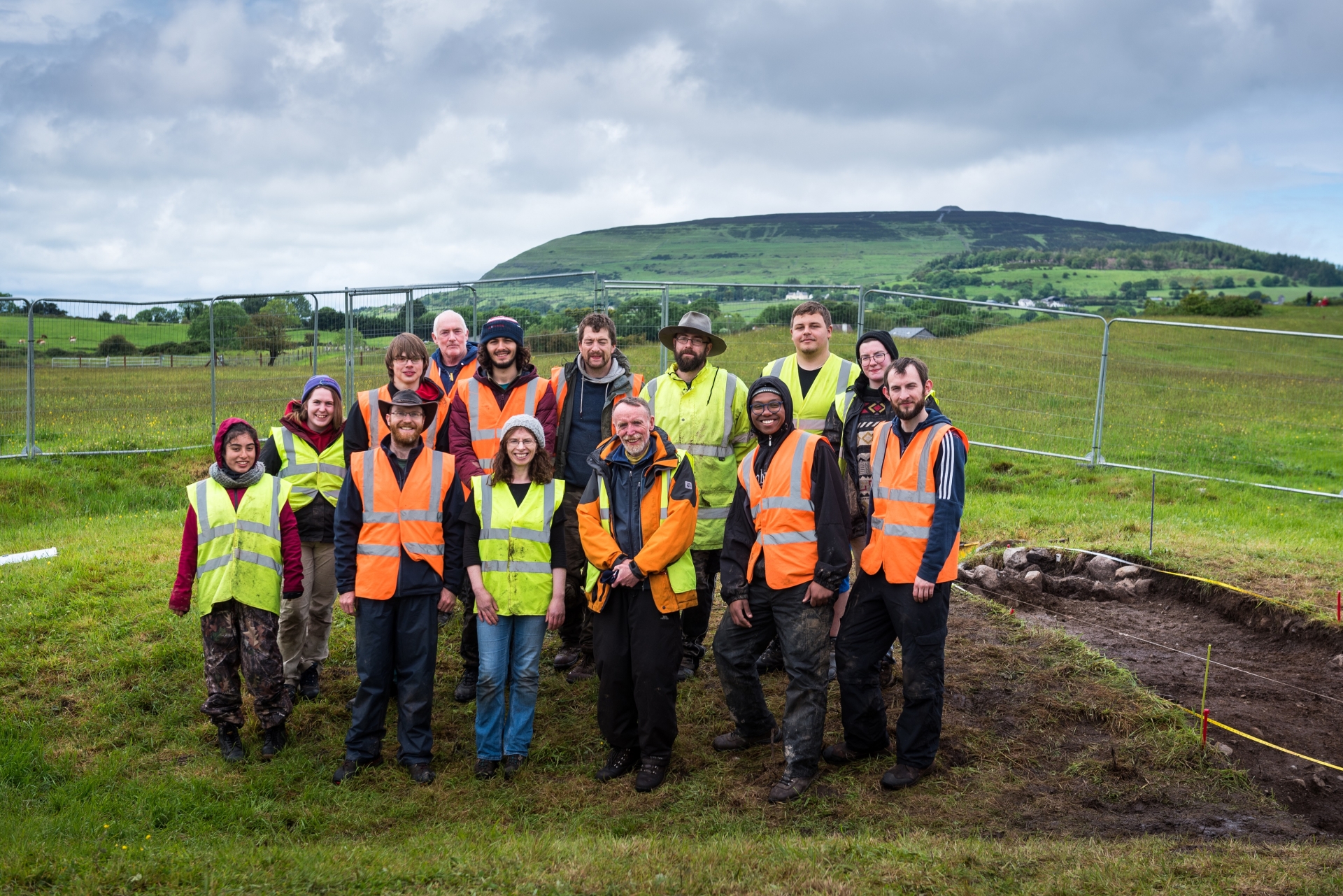 Barrows are circular earthen monuments surrounded by a circular ditch. These sites typically date to the Bronze Age and Iron Age, ranging from between 4,000 and 1,500 years old.

In 2016, Dr Bonsall and IT Sligo archaeology students carried out a series of geophysical surveys at Carrowmore to see beneath the soil of this and several other monuments in the area.

“This particular site turned out to be very interesting. Our survey revealed several features that were not visible above ground. We discovered that the ‘barrow’ contained a central pit and a substantial circular ditch” said Dr Bonsall.

The results of the geophysical survey were one of the reasons why this particular site was chosen for investigation.

“Antiquarians and archaeologists have been studying Carrowmore for over 200 years, but the focus has always been on the Neolithic megalithic tombs. We were keen to change focus and find out more about this particular ‘barrow’ monument, and how it related to the concentration of megalithic tombs at Carrowmore” said Dr Marion Dowd.

“There are several barrows within the Carrowmore complex. These would generally be viewed as Bronze Age or Iron Age in date, coming several thousand years after the Neolithic tombs. We wanted to find out why a site that is normally considered to be much later in date was built amongst the passage tombs.”

The archaeological excavation produced quite exciting and unexpected results. Dr Dowd said “Our excavations have revealed that this monument does not appear to be a barrow at all. So far, we cannot find any parallel for it in Ireland.”

The team found that the circular ditch surrounded a central raised area that consisted of a thick circular layer of stone. Inside this was a sunken area with black, charcoal-rich soils. 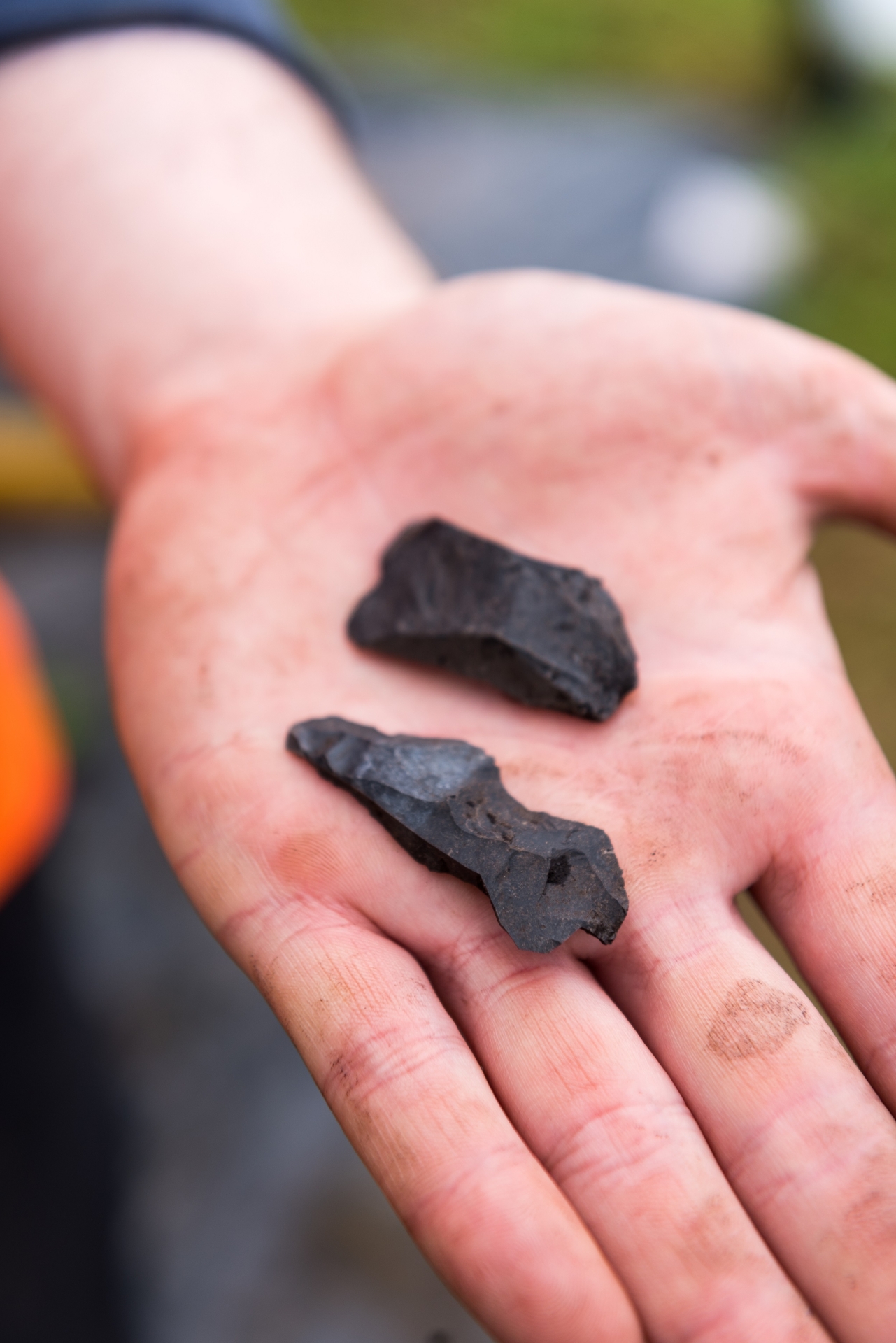 Several prehistoric tools made from a hard stone called chert were discovered within and around the monument.

“We have a lovely collection of chert scrapers and blades from the monument. These would have been used for activities such as working animal hides, cutting and preparing food, basket working and bone working” said Dr. Dowd, “essentially a prehistoric tool kit”.

The IT Sligo archaeologists carried out the first excavation at Carrowmore to modern scientific standards.

“The excavation trench covered just 10% of the archaeological site, so the majority of it has been left completely undisturbed. We have been given a unique insight into Carrowmore and prehistoric Sligo.

“We collected over 350 individual artefacts from the trench, some of which were found in the ploughsoil, as well as in the prehistoric monument itself. We also excavated and examined 15 tonnes of soil from the trench. Every single grain of soil was sieved through a fine wire mesh, ensuring that we recovered every possible artefact from the trench”, said Dr Bonsall.

Dr Dowd said, “We are now focussed on post-excavation analyses of all the materials recovered during the excavation, and hope to have scientific dating in the next few months. At the moment what we can say is that we have quite an enigmatic prehistoric monument: something different and new.”