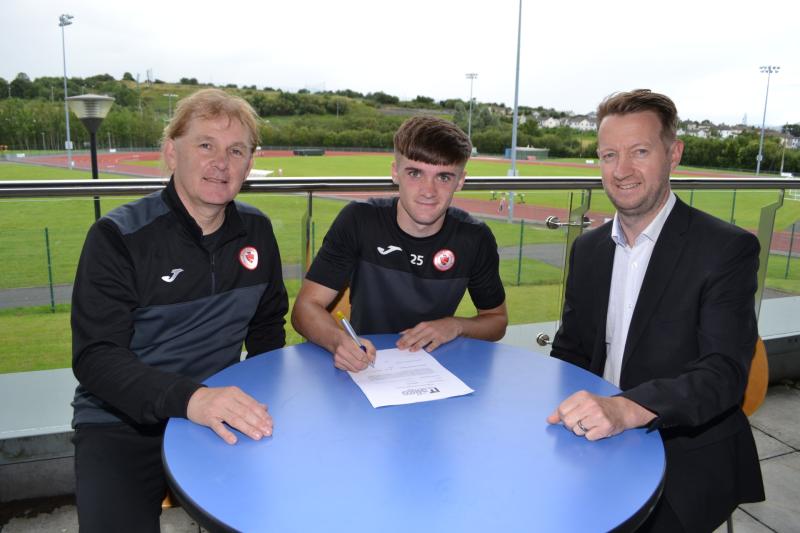 Leitrim Village's Niall Morahan has today extended his contract with SSE Airticity League Premier Division side Sligo Rovers as he becomes the first recipient of this year's IT Sligo scholarship.

Niall, who was a member of the Ireland U19 squad that recently reached the semi-final of the UEFA European Championships has featured both at right-back and centre midfield so far this season for the Bit O'Red.

Niall Morahan: “I think it’s good to take on education as well as football. I’m 19 but I want to open up different avenues for myself.

“My long-term future is here at The Showgrounds and that’s very reassuring too. I wanted to commit myself to the club & what is happening here.” pic.twitter.com/htwHbO2ApC

Niall is the first recipient this year of one of two scholarships, co-funded annually by IT Sligo and Rovers. Niall will study a business degree at IT Sligo while also continuing to train and play with Liam Buckley's side.

Commenting after signing his new deal earlier today Niall said: "I think it’s good to take on education as well as football. I’m 19 but I want to open up different avenues for myself.

"My long-term future is now here at The Showgrounds and that’s very reassuring too. I wanted to commit myself to the club and what is happening here.

"To do that and also start third-level education is ideal. Working under Liam and John Russell has been fantastic and I’d like to thank all my coaches and Carrick Town before that who have helped me be in this position where I could sign today."

@itsligo with @sligorovers are delighted to offer Niall Morahan the first of their joint Scholarships. This partnership demonstrates our joint commitment in supporting those involved in sports at the highest level whilst undertaking a programme of study. Welcome Niall #bitored pic.twitter.com/67H9MVfwKn

Rovers manager Liam Buckley paid tribute to Niall when he commented: "Niall played 15 games before he turned 19 and now he starts a college course while remaining an important part of the squad and training and playing matches as normal.

"It is a great start to any career and we’re looking forward to him being a big part of our future and continuing to make progress."

Those sentinments were echoed by Sligo Rovers CEO Colin Feehily who said: "We see Niall as another success story of our underage structure. Niall came to us from Carrick Town FC and worked his way up through our U17 and U19 squads, before making his senior debut in 2018.

"I feel today shows we are not solely focusing on preparing our players on the field, but we are helping them and giving them opportunities off the field too through IT Sligo and their fantastic facilities both sporting and academically.

"I’d like to thank Niall’s previous coaches at Carrick Town and those he has worked with here in our underage set up also. I’d also like to congratulate Niall on his contract and to his family for their help and support to both him and the football club."