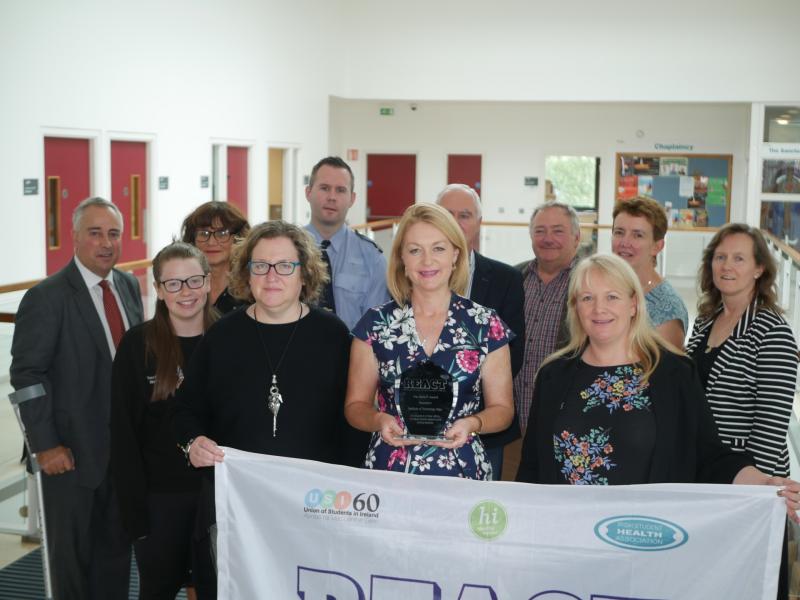 IT Sligo Staff and Student Union with REACT Award for their efforts to reduce harm experienced by students from excess use of alcohol.

The students and staff of IT Sligo were recognised nationally at a recent award ceremony in Dublin for their efforts to reduce harm experienced by students from excess use of alcohol. At the inaugural presentation ceremony for the REACT (Responding to Excessive Consumption of Alcohol in Third Level) awards in Dublin City University, The Minister of State for Education Ms Mary Mitchell O’Connor congratulated the 10 institutions involved in this ground-breaking initiative.

IT Sligo’s Student Health Nurse, Caroline Kennedy-Crawford on receiving the award said; “Myself and the team leading the REACT project at IT Sligo are delighted to have achieved the category of Excellence, which is the highest award obtainable in the React Project.

Over the course of the last 3 years, the team at IT Sligo together with the Students Union have implemented a variety of programmes and initiatives to tackle the ongoing issue of excessive alcohol consumption among students. It is their hope that the cumulative impact of these actions will impact positively on excessive alcohol consumption and will have a positive impact on the physical and mental health and well-being of the students.

The React Project is one which the team feel is of great value to the college and they hope that with sustained efforts, it will be of benefit to the future students of IT Sligo as well”.

REACT is an awards and accreditation scheme for 3rd level institutions who implement an action plan in partnership with their students and student leaders that seeks to reduce the adverse consequences of excess alcohol consumption.

Amongst the many actions implemented across the institutions were the provision of an on-line behavioural change tool on alcohol for incoming first year students, the inclusion of alcohol and intoxication as a named hazard to be considered in planning and running large scale student events and the training of university staff in the delivery of screening and brief intervention therapy.

IT Sligo and Letterkenny IT partnered with the National Alcohol Forum in delivering the interventions, with REACT being the cornerstone of the Letterkenny local alcohol community action plan.

A key part of the success of the initiative has been the support of the Union of Students in Ireland and the local student leaders in each of the participating institutions. Dr. Michael Byrne, the Director of REACT from University College Cork, commented “REACT is about working in partnership with our students to address the issue of harms from excess alcohol. It is an innovative way of encouraging institutions to translate good intentions into actions and paper-based policies into whole institution plans.”