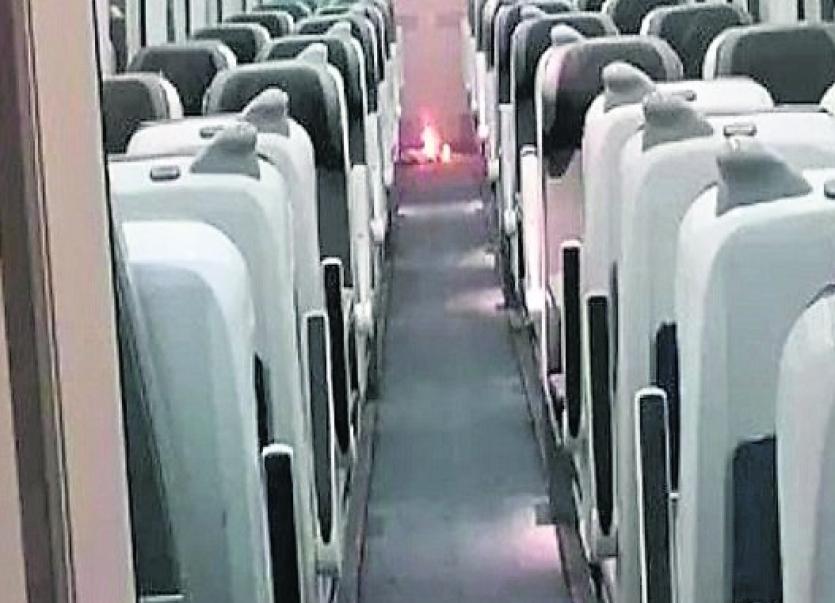 The fire that was started in a carriage on the Sligo to Dublin train last Thursday evening. A man was arrested by Gardai

An increase in the number of anti-social behaviour incidents on trains in the past year has led to local politicians calling for additional measures, including transport police, to protect passengers.

Both Senator Frank Feighan and Deputy Marc MacSharry have expressed their concerns following a serious incident on the 7pm Sligo to Dublin train last Thursday when a man started a fire in one of the carriages.

The train was stopped at Boyle station and the man was removed by Gardai and arrested.

Senator Feighan said he made it very clear to Minister Ciaran Cannon, who was representing Transport Minister Shane Ross during a Seanad debate last week, that Irish Rail’s top priority must be the protection and health and safety of its passengers.

“I am very disappointed to say that the incidence of anti-social behaviour appears to be on the increase on many of our train routes, including the Sligo-Dublin line.

“Even Irish Rail management have admitted as much, conceding to the Irish Times newspaper late last year that – and I quote - “both employee reports and customer feedback do confirm that there has been an increase in the number of anti-social behaviour incidents over the past 18 months.”

He said the vast majority of these incidents are being caused by a small minority of people.

“It's causing concern and is something I think we need to take more seriously,” he said.

According to figures recently obtained, 86 alleged incidents of anti-social behaviour occurred on the Sligo-Connolly Dublin network over the last two years.

“That equates on average to two incidents on the line a week. That’s unacceptable by any measure.

“Unfortunately, we have also learned of incidents of anti-social behaviour on the Sligo-Dublin line in the last week or so.

Clearly, this is an intolerable situation and it begs the question as to what exactly Irish Rail are doing to combat this thuggish behaviour, whether it be on the Sligo line or any other network.

“We simply cannot have a situation where decent, law-abiding people are paying good money for rail fares only to be terrorised when they get on board.

“I would certainly join the calls for additional measures to deal with the scourge of disruptive passengers. Minister Cannon informed me that a Community Garda will be assigned responsibility for liaison with transport providers’ local site managers in identified ‘hot spots’.

Fianna Fáil spokesperson on Transport, Tourism, and Sport Marc MacSharry also expressed his concern with what happened on the Sligo to Dublin train last Thursday and described what happened as “shocking.”

He paid tribute to Irish Rail staff who helped customers leave the carriage, then extinguish the fire and lock the carriage in question.

“What happened last Thursday night on the Sligo/Dublin train is not an isolated incident. We will continue to put pressure on Minister Ross until he realises the full extent of the fear and worry caused by anti-social behaviour on public transport across Ireland.

“A zero-tolerance approach must be taken to target the culprits of anti-social behaviour and deter these incidents from persistently occurring on our public transport services,” Deputy MacSharry said.