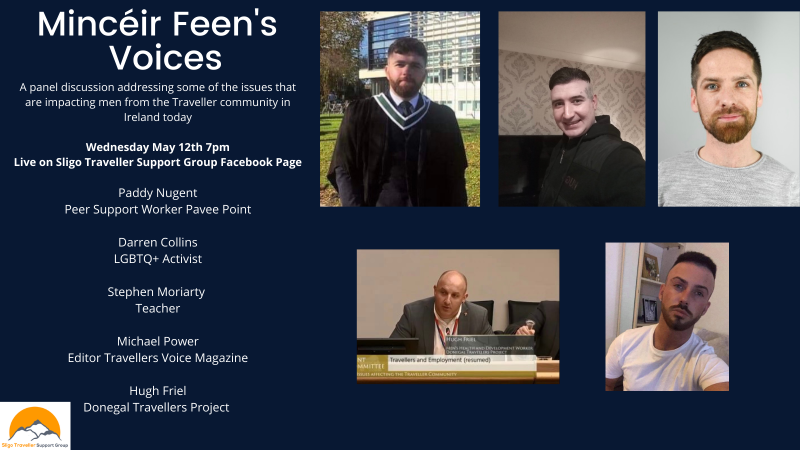 This coming Wednesday, May 12th, Sligo Traveller Support Group are hosting an online event highlighting some of the issues that are impacting men in the Traveller community in Ireland.

A diverse panel with a variety of lived experiences of issues including mental health, suicide, substance misuse, education, accommodation, sexuality and employment will discuss the some of the challenges and opportunities that are faced by Traveller men in Irish society today.

The panel discussion takes place live on the Sligo Traveller Support Group Facebook page and is open to all.

The panelists will each bring their own personal experiences, insight and expertise to the evening.

Paddy Nugent is a peer support worker with Pavee Point and having spent a number of years in the prison system and battling substance misuse issues now wants to support people who are in a similar position to what he was.

Darren Collins is a gay member of the Traveller community who wants to use his own experiences of poor mental health and struggling with his sexuality to help others in the community.

Michael Power is an early school leaver who became editor of Travellers Voice Magazine and is known to be the first Traveller editor of a national publication.

Stephen Moriarty is a Traveller man from Tuam in Galway and having graduated from NUI Galway is now a secondary school teacher.

Hugh Friel works with Donegal Travellers Project as a men's health and development worker and has extensive experience as an advocate in a range of areas including mental health, accommodation, and anti racism.

Organiser of the event, Jamie Murphy said, "We could encourage as many people as possible to join this event. Whether you are from the Traveller community or another community everyone will take something from this discussion.

"The caliber and experiences of the guests we have are second to none and its a great opportunity for the public, service providers and politicians to get an insight into the challenges and opportunities that men in the Traveller community face today."