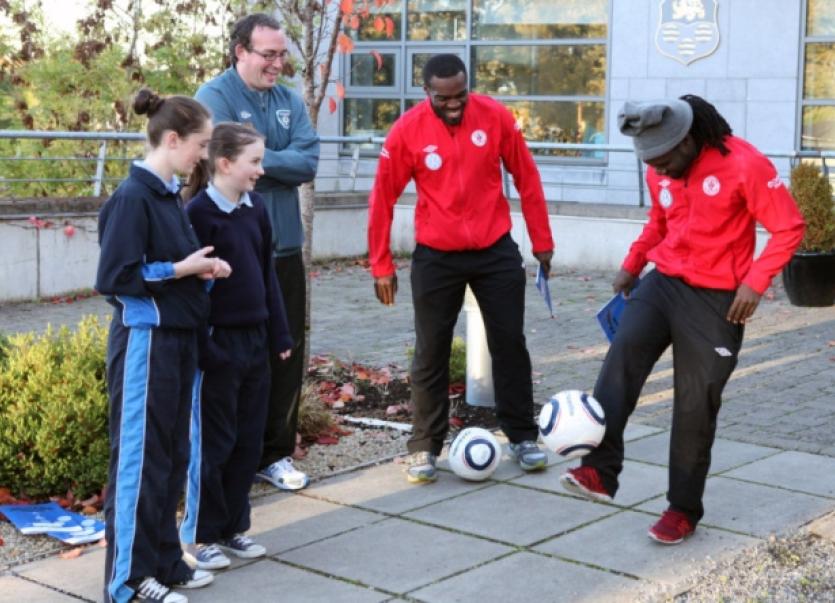 For the fourth time in five years Sligo Rovers are to contest the blue riband event of Irish football when they compete in Sunday’s FAI Cup final.

For the fourth time in five years Sligo Rovers are to contest the blue riband event of Irish football when they compete in Sunday’s FAI Cup final.

The despair of defeat in 2009 was soon forgotten as the Bit O’Red lifted the famous trophy in 2010 and then retained it in 2011 with goalkeeper Ciaran Kelly going down in history as he produce the vital saves in successive penalty shoot-outs.

Although they didn’t contest last year’s final, 2012 was a special year for the club as they ended a 35 year wait to be crowned League of Ireland champions.

The disappointment of not being able to retain the league title has been made easier with the success of the team in the FAI Cup and last week assistant manager Gary Stevens and players Joseph Ndo and Pascal Millien gave their thoughts ahead of Sunday’s showpiece.

Although disappointed to see his side relinquish their league title, Stevens has been pleased with his first year in the League of Ireland.

“I believe it has been a good season. As defending league champions it is never easy to retain that title and we’re not going to be able to achieve that. To get to the FAI Cup Final is a real thrill. What we need to do now is to make sure we win it.”

Having played in the 1983 FA Cup Final for Brighton & Hove Albion against Manchester United and the 1987 Final for Tottenham Hotspur against Coventry City, Gary knows all about cup final day, but having seen his side defeated in both of those matches he is hoping Sligo Rovers fare better this Sunday in Dublin.

“A domestic Cup final, the domestic football association of any country, their cup final is a huge occasion. Whether it is the FA Cup Final in England, which I’ve played in a couple of those, or the FAI Cup Final here in Ireland, it is a huge occasion. The eyes of the country are on it, we’ll have a bring crowd there in the Aviva Stadium. The Aviva Stadium is a world class stadium, a top playing surface, I’m certainly looking forward to it and so is everyone at Sligo Rovers.”

Midfielder Joseph Ndo is another who is eagerly looking forward to Sunday’s final.

Recently voted supporters player of the season, the 37 year old former Cameroon international who was involved in the 1998 and 2002 World Cups missed the Cup Final two years ago due to injury and is hoping his current hamstring injury does not rule him out of Sunday’s clash with Drogheda.

“The injury is getting better but you know what, I’m not disappointed, what is going to happen is going to happen. I just have to prepare myself to try to play that final and if it doesn’t happen I just hope that we win because I know it won’t be easy.”

Having been capped 21 times for his country Joseph knows all about playing in big games and he acknowledged that is what he enjoys most.

“I think that’s what we live for,” he said frankly. “When those moments come, that is when you have to show what you are capable of. I think all the talent in the world will not be fulfilled if you don’t show that. So what they call ‘big games’, that is what we live for.

“It is where you are going to see if you are capable or not.”

Looking ahead to Sunday Joseph said, “It is a game I want to win. I want to play and I want to win. It can be marked as a Cup Final but at the end of the day if you don’t win you won’t be happy.”

Haiti international Pascal Millien is coming to the end of his second year with Sligo Rovers and he is certainly looking forward to Sunday’s final.

“It’s pretty much a dream come true. I’m excited, I can’t wait for that day.”

Pascal may not have enjoyed as much game time as he would have liked this year but he started the league game against Drogheda recently and believes the setback of not retaining the league will help the team as they bid for the final trophy of the season.

“Sometimes you have to lose to know what you have to work on. We are still in the top three teams in the league so that’s not bad at all.”

The winger believes the FAI cup would be a reward for the team’s hard work all year.

“Our main focus now is trying to make the people and fans proud for the Cup Final so we have to be focused and hopefully we can bring the trophy home because that’s what people have been working for all season for.”

Extensive interviews with Gary Stevens, Pascal Millien and Joseph Ndo will be published here on the Leitrim Observer website in the coming days ahead of the Ford FAI Cup Final.