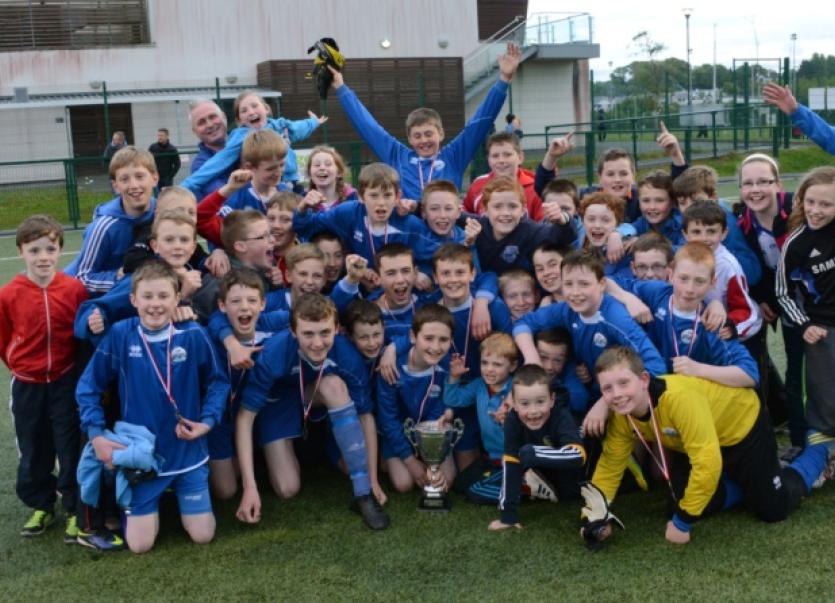 Carrick Town overcame the shock of conceding an early goal to come from behind against Real Tubber last Wednesday and claim the Sligo Leitrim U-13 title in IT Sligo.

Carrick Town overcame the shock of conceding an early goal to come from behind against Real Tubber last Wednesday and claim the Sligo Leitrim U-13 title in IT Sligo.

Having beaten the same opposition in the U-12 final in a penalty shoot out last season, Carrick knew they would be in a serious battle and so it proved.

Carrick fell behind after just 12 minutes when a well worked move by Real Tubber resulted in a powerful header to the net by the centre forward. Despite this early setback, Carrick soon got into their stride and produced a string of fine passing moves as Niall Gannon, Paul Keaney and Sam Barnes all came close to finding the breakthrough.

Just as it looked like Carrick would be heading into the halftime break a goal behind, a great move started from full-back Shane Crowe down the left-hand side resulted in star winger Diarmuid Kelleher finding the roof of the net with a powerful drive.

The Carrick lads started the second half buoyed by this goal and dominated proceedings right from the kick off. However despite all their possession the Carrick lads could not fashion a winner and had to be alert on many occasions from the fast counter attacks from the Tubber side.

Centre halves Paul Woods and David O’Connell were magnificent in marshalling the Carrick defence and kept the Tubber attack at bay. Goalkeeper Sean Reynolds was always on his toes and alert when called upon. Paul Keaney had two long range free kicks which went narrowly wide in the second half but the scores remained level after 70 minutes and so it was in to two, ten minute periods of extra time.

Both periods of extra time were cagey affairs as players were visibly starting to tire and afraid to push too many men forward.

The game seemed destined to be heading in to the dreaded penalty shootout stage yet again when up stepped Sam Barnes to produce an exquisite ‘Steven Gerrard-esque’ strike from the edge of the box to find the roof of the net and spark wild scenes on the sidelines from the large travelling contingent.

The goal came about as a result of tremendous work from Donal Casey and Oisin Bohan down the left hand side. Both of these players deserve tremendous praise for their perseverance and dedication to the cause as they both were carrying injuries coming into the games but were determined to play their part in achieving success.

Credit to Real Tubber who mustered a few last attacks on the Carrick goal as the final seconds ran down. Thankfully a fantastic last ditch tackle from Jack Flynn preserved the Carrick lead from one such attack. Soon after that attack the final whistle blew to great excitement and rapturous applause from the Carrick players and supporters.

It really was a superb team performance from start to finish but ‘Man of the Match’ has to go to Paul Keaney who demonstrated tremendous desire and determination to bring the cup home to Carrick.

Carrick Town finished the season with a hugely impressive league record of 13 wins and a draw from their 14 league fixtures.