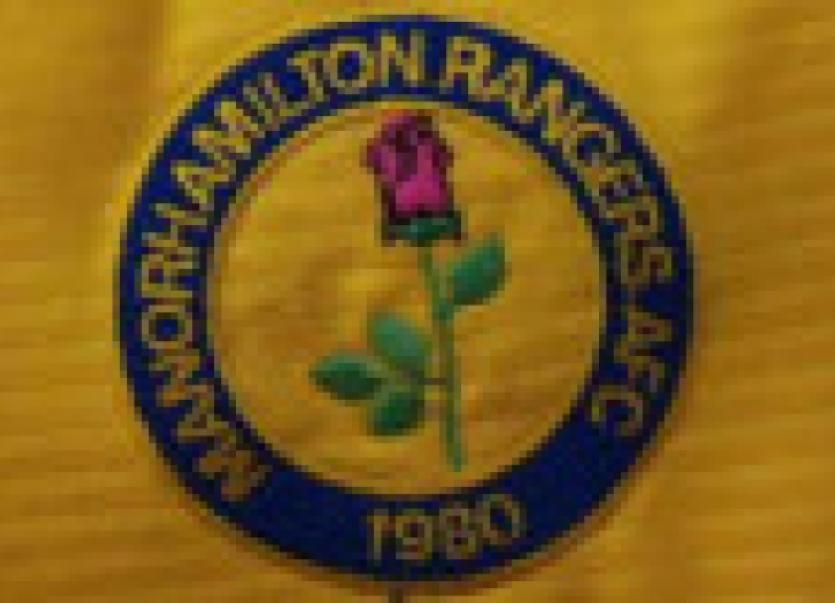 The opening half proved to be a difficult one for the visitors as they dealt with considerable pressure from the hosts who currently sit joint top of the Galway junior league.

Mervue struck for the game’s opening goal shortly after the half hour mark when they got the better of Manor Rangers’ offside trap and when the ball was squared to Simon Walsh he dispatched the shot to the Manor net, despite the best efforts of Colin Gilligan.

Manor were under considerable pressure for the majority of the opening half, pressure which was dealt with by the disciplined five man midfield and the well organised defence, marshalled by Thomas McDonald and James Glancy.

On the stroke of half-time Manor Rangers gave a glimpse of their threat as an attacking force. Paul Boylan’s dangerous run was matched by the quality of his delivery but unfortunately from a Manor Rangers point of view the Mervue goalkeeper was equal to Richie Hewitt’s shot and the ball went out for a corner.

In fact that proved to be the last action of the opening half as there wasn’t enough time to take the resulting corner and Mervue left the pitch at the break the happier of the sides as they enjoyed a solitary goal lead.

Manor Rangers began the second half with a renewed sense of purpose and deservedly scored an equaliser in the 59th minute.

Paul Boylan, operating as the lone forward, did well to win a corner and with his trusted left boot, Alan Harvey swung a vicious delivery towards the Mervue goal. Such was the quality of the delivery, Mervue were unable to clear the ball and it found its way to the goal.

That goal was typical of Harvey’s contribution over the 90 minutes as he rolled back the years to produce an excellent performance from left-back.

Now playing with a renewed sense of belief Manor Rangers came agonisingly close to taking the lead when the excellent Hassan Alsaid Ajip attempted to lob the Mervue goalkeeper but his shot struck the top of the crossbar.

Mervue punished Manor for that miss when they retook the lead in the 63rd minute. Mervue managed to overload the back post area and when a free was floated in Eoin Concannon was free to dispatch his header past Colin Gilligan to restore Mervue’s lead.

That lead was to last less than three minutes as Manor Rangers hit back with an excellently worked team goal. Shane Loughlin began the excellent team move when he won possession near the half way line and released Adrian Croal, who was arguably the best player on the pitch over the course of the game. Croal combined with Alan Hickey to as Manor advanced towards the Mervue box.

Paul Boylan made a clever decoy run towards the front post that attracted the attention of the defence while Croal fed the ball to Alan Hickey who had continued his run and he dispatched his shot to the goal.

Mervue piled on the pressure for the remainder of the game but it wasn’t until the 90th minute that Mervue struck to break Manor Rangers’ hearts. Stephen Cunningham appeared to be some distance offside but the referee waved play on and he shot past Gilligan to regain the lead for his side.

From the kick-off Boylan shot from just inside the Mervue half, resulting in a corner for Manor. However, with nearly the entire team forward in search of an equaliser, Mervue launched a counter-attack and Simon Walsh was on hand to secure victory with Mervue’s fourth goal.

Manor Rangers would like to thank the generous sponsorship of Stefan and Seamus, SuperValu, Manorhamilton; John and Alan at Bennett’s Butchers; Paul and Gerry at Mawn’s Fruit and Veg Supplies and Derek Gilmore (energy drinks and sweets suppliers).