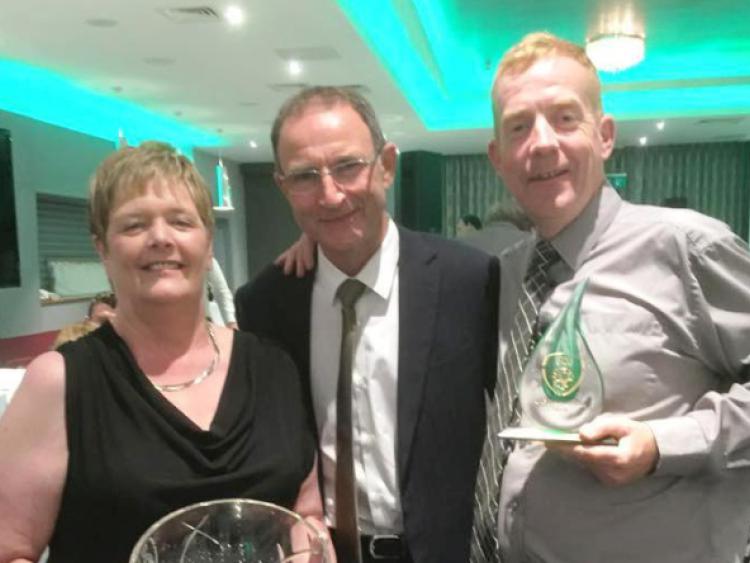 Manor Rangers made it a Leitrim double off the field of play when club stalwarts Bernie Cleary and Dave Cummins were honoured at last Friday’s FAI AGM Delegates Dinner in Sligo.

Manor Rangers made it a Leitrim double off the field of play when club stalwarts Bernie Cleary and Dave Cummins were honoured at last Friday’s FAI AGM Delegates Dinner in Sligo.

After a week in which Leitrim clubs showcased their work to the top officials of the FAI, the behind the scenes work in Leitrim was honoured as the Manor Rangers duo both scooped awards on Friday night.

Bernie won the John Sherlock Service to Football Award which recognises the contributions made by volunteers at all levels of football to the continued success and development of the game.

Dave won the National PRO’s Award for his work with Manor Rangers to cap off a fantastic week for the sport in Leitrim with the visit of Ireland manager Martin O’Neill on Thursday a huge success.

Leitrim County Council may have been honouring the Football Association of Ireland as part ofpart of the Festival of Football with a civic reception but there was no doubt that O’Neill and former Ireland and Liverpool great John Aldridge were the star attractions in the council chambers.

Also in attendance was Mohill’s Dearbhaile Beirne who was a member of the Irish U-17 team that competed in the recent UEFA U-17 Championships in Iceland.

Welcoming the delegation Leitrim County Council Cathaoirleach Cllr John McCartin said, “It is a pleasure and a privilege as one of my first functions as Cathaoirleach to welcome such  distinguished guests.”