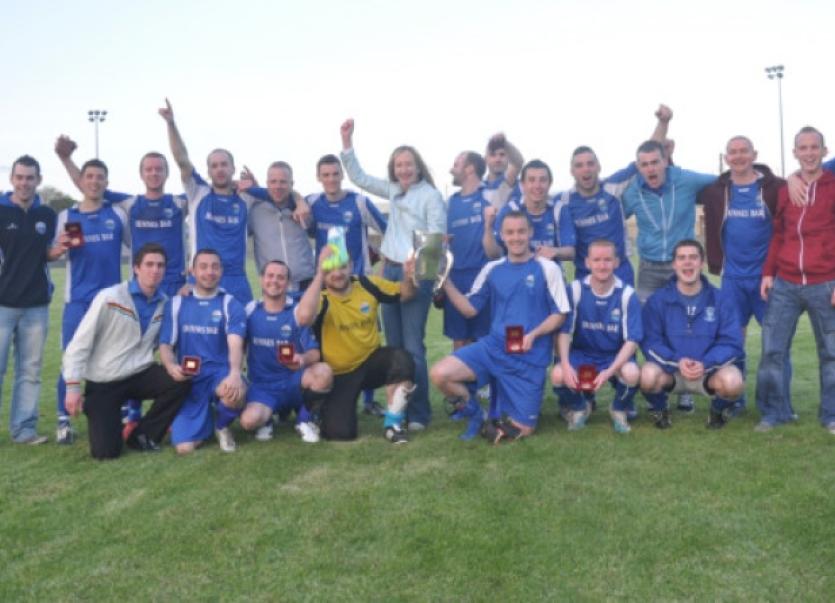 An incredible season for Carrick Town which had already seen them gain promotion to the Super League for the first time in 30 years was capped on Friday night last in MacSharry Park when they claimed the McSharry Foley Cup after a thoroughly deserved win over MCR in the final.

An incredible season for Carrick Town which had already seen them gain promotion to the Super League for the first time in 30 years was capped on Friday night last in MacSharry Park when they claimed the McSharry Foley Cup after a thoroughly deserved win over MCR in the final.

Two goals from Johnathon Cassidy, one in each half, were enough to secure victory against an MCR side who threatened occasionally but Carrick’s centre back partnership of Johnathon Corrigan and Fergus Daly were dominant throughout the game. Goalkeeper Adrian Rapacki made a wonderful save midway through the opening half and Niall Comerton made a vital goal line clearance from the resulting corner but over the course of the game there could be no denying Carrick were worth their victory.

The game began in the best possible manner from a Carrick Town point of view as Johnathon Cassidy scored a stunning goal in the sixth minute. The patient build up saw the move begin with a short pass from Adrian Rapacki and as the ball was moved through the middle of the pitch, with Kyle Bryant and Liam McTiernan heavily involved it become clear that MCR were content to let Carrick Town enjoy possession in the middle. However, when the ball was played to Cassidy, the MCR defence suddenly found themselves with someone attacking them with pace and purpose. From over 20 yards Cassidy unleashed an unstoppable shot that flew straight into the top corner of the MCR goal.

MCR’s first sight of the Carrick goal came three minuets later when Colin Lynch nearly capitalised on a poor clearance but his snap shot from distance was just wide.

As the half progressed Carrick continued to look dangerous going forward but MCR were also beginning to make more of an impact. Dromahair native Ciaran Harvey was picking up plenty of clever positions as the Sligo side began to pose more of threat. With 20 minutes remaining it appeared as though MCR had forced an equaliser when Harvey rose highest to meet a free kick delivered from a wide. His downward header seemed destined for the corner of the Carrick goal but Adrian Rapacki showed great agility to get down low and made an excellent save. From the resulting corner MCR again came agonisingly close to finding an equaliser but on this occasion Niall Comerton was perfectly placed to made a vital goal line clearance.

Having survived those scares Carrick upped their performance and dominated the remaining stages of the opening half but were unable to find a second goal, despite the best efforts of Liam McTiernan who was having a big influence on proceedings.

The opening stages of the second half saw both sides threaten but it wasn’t until the 60th minute that either goal looked like being breached and it was Carrick who came agonisingly close to scoring a second goal. From 30 yards Niall Flanagan unleased what seemed to be an inch perfect curling and floating shot but MCR goalkeeper Gareth Quinn somehow managed to get his fingertips to the ball to divert the danger.

Eight minutes later there was a half-hearted penalty shout from the MCR dugout as a great opportunity for an equaliser went abegging. A series of short passes around the Carrick box presented Colin McMorrow with a sight of goal but as he was about to shoot the forward lost his footing and the chance was gone.

That proved to be decisive as the next chance of the game saw Carrick extend their lead as Johnathon Cassidy scored his and Carrick’s second goal of the game. Niall Comerton’s short free was worked to Sean Hayden and then on to Jack Delacy who was introduced as a substitute. Delacy’s ball behind the MCR defence was delivered with the precise weight to allow Cassidy the opportunity to double his tally. Showing great composure Cassidy curled the ball across the goalkeeper and into the MCR for the decisive goal.

MCR attempted to get back into contention but the Carrick defence stood strong. The Carrick performance was typified by Johnathaon Corrigan who limped through the closing stages as cramp left him struggling to walk but he and his team mates saw out the closing moments to deservedly claim victory.