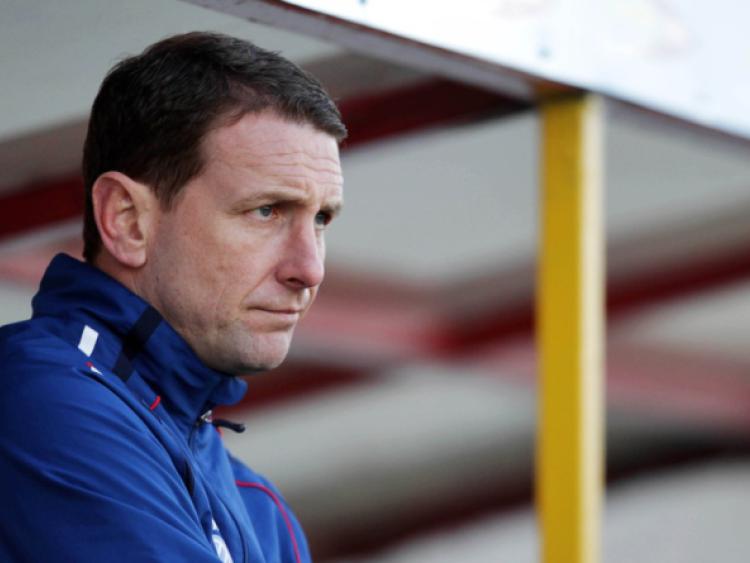 The home supporters were given a first look at a number of players who arrived during the off season and it was one of those players, Danny Ledwith who almost opened the scoring. Ledwith saw an excellently struck free kick crash off the Athlone upright inside the opening five minutes of the contest.

Under the management of Mick Cooke, who guided Drogheda United to last year’s FAI Cup Final, Athlone proved to be very well organised and very difficult to break down.

With driving rain and a strong wind also proving to be an obstacle for the home side, the Bit ‘O Red maintained their composure and had a number of chances to open the scoring but were unable to force the elusive breakthrough.

Against the run of play it was the visitors who opened the scoring in the 53rd minute when Danny Ledwith was penalised for handling the ball in his own penalty area and Philip Gorman converted the resulting spot kick.

To their credit, Rovers showed no sign of panic and they were back on level terms 10 minutes later when man of the match John Russell headed David Cawley’s inviting cross past Paul Skinner.

With just three minutes remaining Russell turned provider as he created an opportunity for Evan McMillan and from close range he did well to dispatch his shot to the Athlone goal to secure all three points.

Sligo Rovers equalled their own record for the biggest aggregate win in the Setanta Cup when they defeated Crusaders 5-0 in The Showgrounds on Monday night.

With the tie all but over after the first leg which Rovers won 4-1, manager Ian Baraclough made wholesale changes to the team.

Two members of the U-19 team, Jake Dykes and Liam Flatley saw action over the course of the game with Dykes starting at left-back and Flatley introduced for his debut in the second half.

The scoring was opened by Evan McMillan after Crusaders failed to deal with a Rovers corner and the lead was doubled in bizarre circumstances when the visitors goalkeeper Yohann Lacroix completely missed a back pass allowing Danny North to pounce. North doubled his tally for the night when he again capitalised on poor defending to pounce.

Lacroix went some way towards making amends when he saved a Ross Gaynor penalty on the stroke of half time but Gaynor more than made up for that miss after the restart when he curled a stunning free kick past Sean O’Neill who was introduced at half time for Lacroix.

The intensity dropped considerably as the game continued and Liam Flately put the gloss on the win with his first goal for the club.

Rovers advance to the semi-finals of the Setanta Cup where they will face St Patrick’s Athletic.