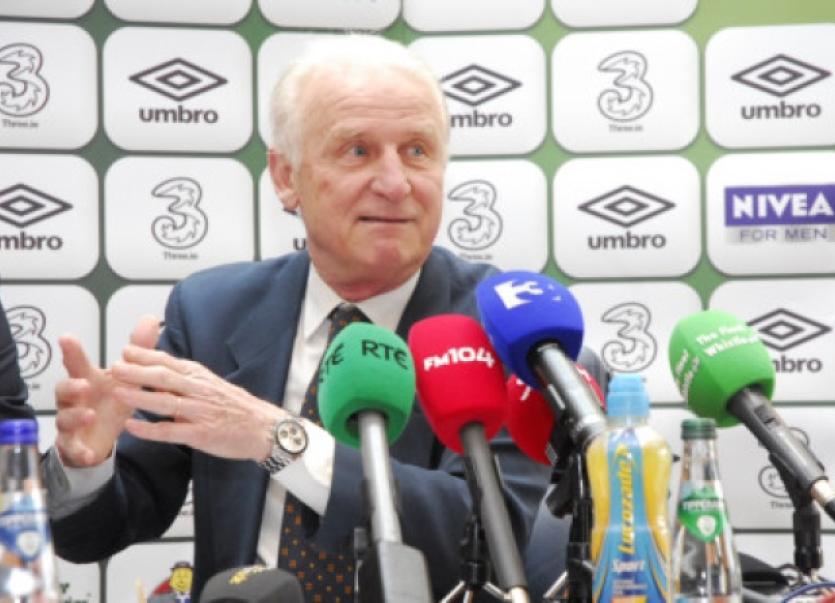 Giovanni Trapattoni today (Monday) announced a provisional 28 man squad to face England in an international friendly in Wembley later this month (May 29) followed by Georgia, Faroe Islands and Spain in June. The squad will be shortened late next week to accommodate injuries etc.

Giovanni Trapattoni today (Monday) announced a provisional 28 man squad to face England in an international friendly in Wembley later this month (May 29) followed by Georgia, Faroe Islands and Spain in June. The squad will be shortened late next week to accommodate injuries etc.

Speaking today in Carrick on Shannon during the town’s 400 year celebrations, the Republic of Ireland manager said, “We must consider the positives from our games against Sweden and Austria when preparing for these fixtures. We produced two strong performances, and the players have proven that they are working very well together. I am very happy to have the squad together for these games. Firstly to prepare for the Faroe Islands World Cup Qualifier, and then for the challenges we have ahead of us in September.”

He continued, “This trip creates the chance to work with the players for a longer period than usual in order to bond and plan for the remainder of our FIFA World Cup Qualifier games. These matches will provide me with the opportunity to experiment with different players and tactics. I am looking forward to assembling the squad in London on May 26.”

Giovanni Trapattoni was present in Carrick on Shannon to highlight the strong partnership between the FAI and Leitrim County Council on several incentives such as The Goal for Peace Programme and the Community Soccer Programme, where football is used as a tool for community development.

Carrick on Shannon, Leitrim’s county town, will be 400 years old in 2013. This is a hugely significant event for Leitrim and the wider Leitrim Diaspora across the globe. There are over 100 events planned as part of the 400th Celebration year. The range of events taking place across sport, culture, music and festivals provides an ideal opportunity to explore all that is wonderful about Carrick on Shannon. Further information available on www.carrickonshannon400.ie.

Tickets for the Georgia (June 2) and Faroe Islands (June 7) games in Aviva Stadium are now on sale from www.ticketmaster.ie starting at €10 for children and €20 for adults (Georgia) and €35 for Faroe Islands. Family tickets are also available. See www.fai.ie for details.

Tickets for the Georgia match also include entry to the FAI Umbro Junior Cup final in association with Aviva. Kick-off is at 1.30pm on June 2 in Aviva Stadium.