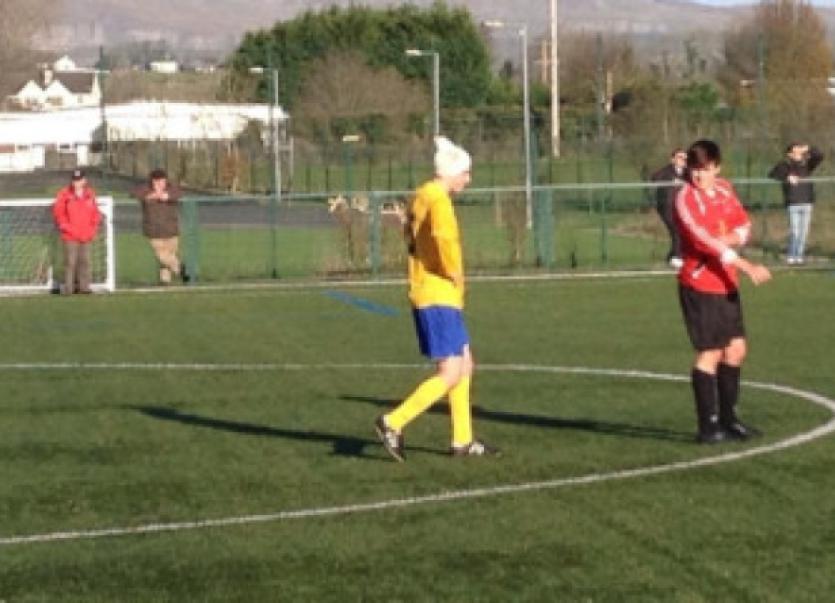 Lady luck smiled on Manor Rangers on Sunday afternoon when Seamus Ryder’s spot kick deep in injury time gave the north Leitrim side a late 3-2 win over Ballisodare United at the Sligo IT Astroturf pitch.

Lady luck smiled on Manor Rangers on Sunday afternoon when Seamus Ryder’s spot kick deep in injury time gave the north Leitrim side a late 3-2 win over Ballisodare United at the Sligo IT Astroturf pitch.

It was Ryder’s second spot kick conversion of the afternoon as the Fermanagh man had put Manor ahead with the game’s opening goal on 9 minutes, also from a penalty.

Brian McDonald gave Manor a two goal interval lead when fired home from two yards when getting on the end of a Hassan Aajip inch perfect cross just before the break.

A reinvigorated Ballisodare created a bagful of missed chances in the second half as they put Manor on the back foot. However the Sligo outfit had to wait until the 81st minute to pull a goal back when Daragh Healy scored from the penalty spot.

The gods to some extend smiled on Manor in the 92nd minute when Ballisodare defender Kevin O’Hara took down Adrian Croal in the box. Ryder then rescued a victory for Manor at the death for what proved to be his side’s tenth win of the season.

Due to Sunday’s Sligo Leitrim v Cavan Monaghan Oscar Traynor Cup inter-league game in Monaghan, Manor Rangers will have this weekend free with their final Super League game prior to the Christmas break scheduled for Sunday, December 6.

The FAI Emerging Talent Programme will host a goalkeeper coach’s clinic at Milebush Park, Castlebar on Sunday January 11. The clinic will run from 11am to 3pm under the direction of Tim Dalton, who is the U15 International Goalkeeping Coach. This event is open to all coaches working with goalkeepers aged 11 to 14 years and will focus on the development of young goalkeepers, how they should be coached and the latest trends in elite underage goalkeeping. Those coaches wishing to attend must register with chris.carey@fai.ie before Friday January 3 at 4pm. Numbers are limited. All attendees should bring note taking materials and boots for astroturf.