Carrick Town hold their nerve
to win after penalty shoot-out 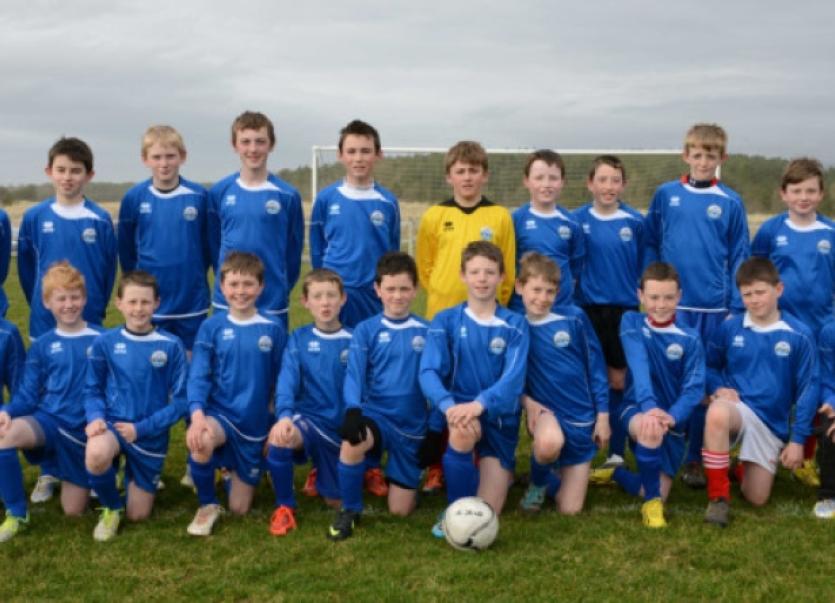 In a dramatic finish that saw Carrick Town force last Tuesday week’s Sligo Leitrim U-12 Final to extra time, the Leitrim team retained their title with a tension filled victory in a penalty shoot-out in Strandhill.

In a dramatic finish that saw Carrick Town force last Tuesday week’s Sligo Leitrim U-12 Final to extra time, the Leitrim team retained their title with a tension filled victory in a penalty shoot-out in Strandhill.

Carrick Town suffered the worst possible start and fell behind to a long range strike from the edge of the box in the opening minute of the game.

However, the Carrick side soon settled into the game and were creating a number of scoring chances.

The midfield duo of Sam Barnes and Donal Casey were bossing the midfield battle and it came as no surprise when the equaliser came in the 24th minute when striker Fiachra Henry bundled the ball over the line after a frantic goal mouth scramble.

Carrick continued to press forward and winger Diarmuid Kelleher had a shot well saved by the Tubber keeper to leave the scores level at 1-1 at the break.

Real Tubber were first out of the blocks again in the second half and scored a fine counter attacking goal in the opening minute. However, Carrick heads never dropped and they soon found their rhythm again and continued to pass the ball well as the have done all season long.

Striker Niall Gannon was unlucky not to score after a smart turn in the box gave him space but his shot was quickly blocked down by the Tubber defence.

Captain Paul Woods and David O’Connell, (a second half substitute) were now controlling the Carrick defence and pushing forward in search of the equaliser.

When Tubber did break free keeper Killian Gaffey was alert to make a smart save with his feet.

Finally with just under ten minutes remaining Donal Casey scored the equaliser latching on to a superb Diarmuid Kelleher cross to stylishly steer the ball into the net.

Flying winger Oisin Bohan almost got a dramatic winner after a superb move involving Sam Barnes and Paul Keaney but his shot was saved well by the Tubber keeper to leave the sides level at the end of the 60 minutes.

Despite dominating the additional 20 minutes the Carrick side could not find a winner so the match went into the dreaded penalty shootout.

Casey, Keaney, Barnes, Bohan all scored expertly from the spot as did the following four Tubber players so it was left to Diarmuid Kelleher to step up to take the final strike. After a short run up Kelleher calmly stroked the ball into the net to leave the final score 5-4 on penalties and spark jubilant scenes of celebration from the Carrick team and supporters.

The biggest cheer of the evening however was reserved for captain Paul Woods when he lifted the cup to a rapturous applause.

There was number of impressive displays including Sam Barnes, Jack Flynn, Paul Keaney and Paul Woods but star man on the night was Donal Casey.

The full panel of 23 players trained hard all season and played a valuable part in this success.

The management team would like to thank all the parents for all their generous support throughout the season and we look forward to seeing everyone again next August for the new season.