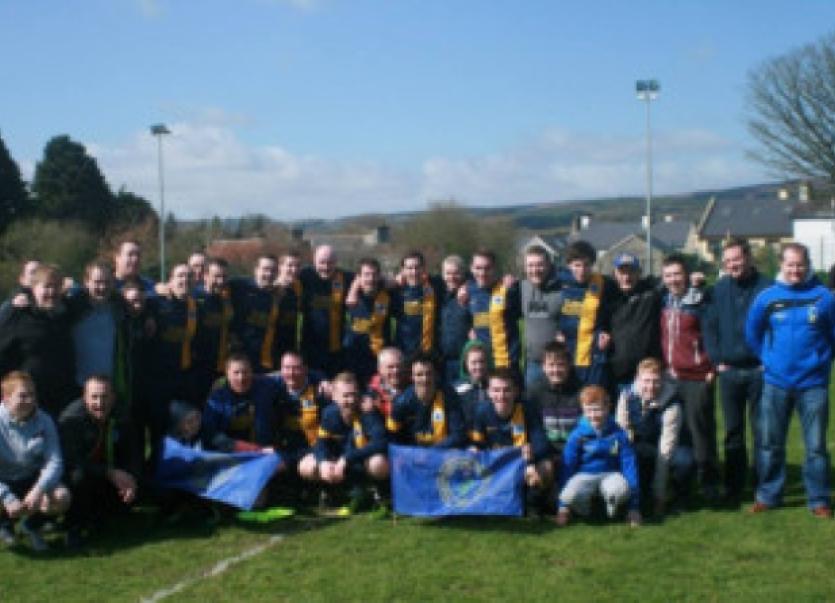 Manor Rangers made a quick return to the Sligo Leitrim Super League after they defeated Coolaney Utd last Sunday to win the Andrew Mullen Premier League in fine style.

Manor Rangers made a quick return to the Sligo Leitrim Super League after they defeated Coolaney Utd last Sunday to win the Andrew Mullen Premier League in fine style.

Alan Hickey and Colin Ryan were the toast of Manorhamilton with two great goals while Coolaney replied with a Martin Devaney penalty plus an own goal.

There was huge pressure on Manorhamilton as any slip from the leaders would have seen Merville waiting to pounce but the kingpins of Leitrim were not to be denied this glorious result and the title Champions.

The official Cup Presentation will be made to Manor Rangers on May 3.

The north Leitrim men drew first blood in this game when Alan Hickey headed to the Coolaney net on eight minutes after being put through by a Thomas McDonald cross from just inside the Coolaney half.

However Coolaney got back on level terms some four minutes later when Martin Devaney netted from the penalty spot after Anthony Higgins was taken down for the spot kick.

Manor failed to convert many chances in the remainder of the half including an Adrian Croal screamer that hit the crossbar.

It was still 1 – 1 at the break. But the gods smiled on Manor some 13 minutes after the restart when Coolaney’s Brian Duggan headed a Paul Boylan effort into his own net as Duggan attempted to clear the ball.

• In other Sligo Leitrim news, Carrick Town shared the spoils with Ballisodare United. A Mark McGoldrick hat trick ensured the home side would share the points as visitors Carrick Town replied with goals from Thomas Lavin, Stephen Sirle and Shane Fitzpatrick