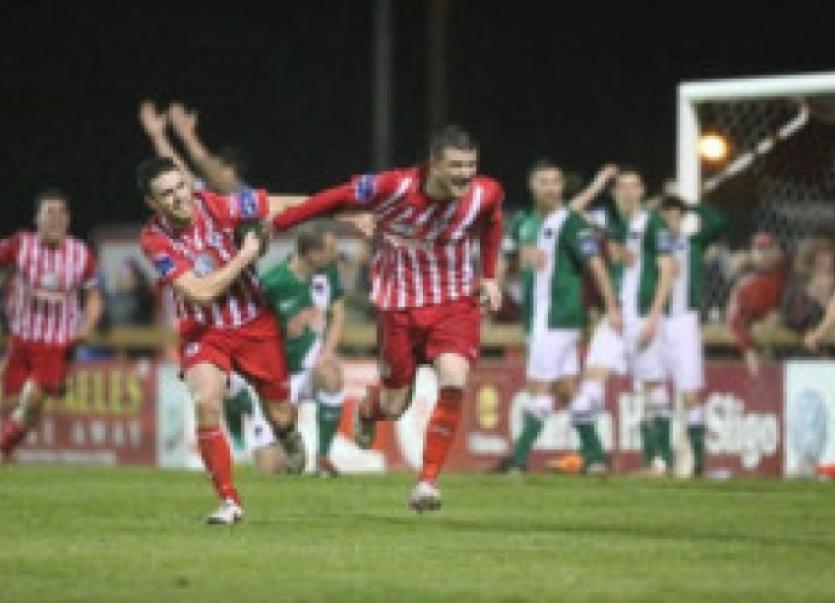 While most home fans would have been satisfied with a point prior to kick-off, when former Sligo Rovers player Ross Gaynor scored in the 96th minute, there was a stunned silence around The Showgrounds, except for the section of the ground housing the Cork fans for whom the prospect of a long bus journey suddenly didn’t seem quite as bad.

A draw was arguably a fair result but the manner of the late equaliser would have been hard to take for Owen Heary who was overseeing his first competitive game since his appointment as Sligo Rovers manager.

With a strong wind at their backs Rovers looked dangerous when attacking during the opening 45 minutes and at the other end of the pitch they looked relatively assured.

With five of the starting 11 making their competitive debuts for the Bit O’Red and the three substitutes who were called into action all appearing for the first time, Rovers could have been forgiven for taking their time to settle into the new season.

Jeff Henderson was unavailable due to a reoccurrence of an injury meaning Gavin Peers was partnered in defence by Stephen Folan who impressed on his debut with a man of the match performance.

With the wind at their backs as they attacked the railway end of The Showgrounds, Rovers dominated matters in terms of possession but struggled to really test Cork City goalkeeper Mark McNulty.

With a midfield pairing of Colin Healy and the recently acquired Liam Miller, Cork have been tipped by many to go one step better than last year when they finished second in the league behind eventual winners, Dundalk.

Although they struggled to impose themselves on the game in the opening half, Cork City came close to breaking the deadlock when Alan Bennett hit the crossbar from close range shortly before the half-time whistle.

The hosts continued to boss matters with the front pairing of Morten Nielsen and Dinny Corcoran taking it in turns to drop deep and link up with the duo of David Cawley and John Russell who got the better of the former internationals playing in the centre of midfield for Cork.

Rovers were dealt a blow when Richard Brush collided with Karl Sheppard and Gavin Peers and sustained an injury that led to an lengthy delay and a debut for substitute goalkeeper Ryan Coulter.

With the game seemingly destined for deadlock, Rovers struck with six minutes remaining to the delight of the majority of the 3,082 crowd. Steven Beattie forced the ball home from close range after a corner caused panic in the Cork City defence.

It seemed as though Rovers were on course for all three points but in the sixth minute of injury time Ross Gaynor, who left The Showgrounds last summer, pounced to ensure a share os the spoils.