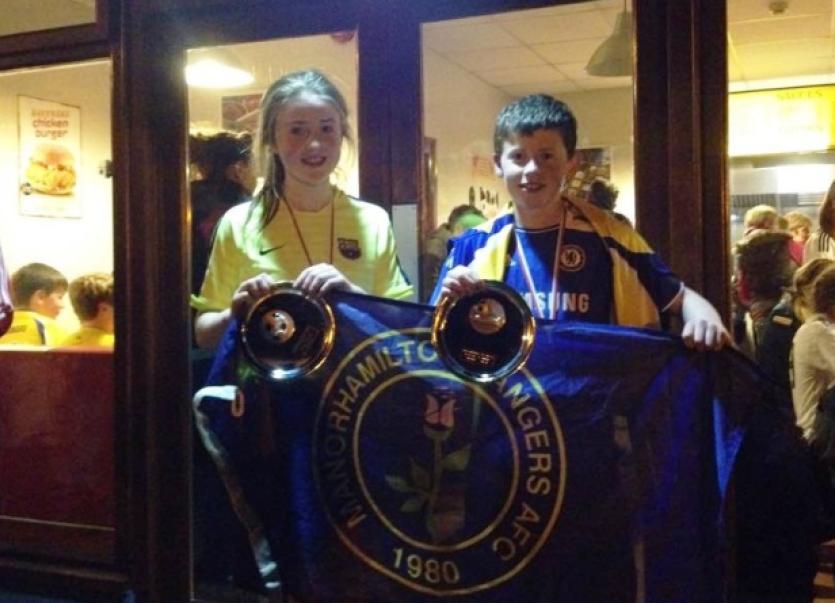 The league season may be over for Manor Rangers but they are still very much in the hunt for cup glory.

The league season may be over for Manor Rangers but they are still very much in the hunt for cup glory.

On Sunday morning last they welcomed Real Tubber, who they had failed to beat in two league meetings, to the Bee Park and with an almost full-strength team to select from they produced a performance which indicated just why they spent so much of the season at the summit of the Super League table.

Manor Rangers made their intentions known straight from the kick-off and were unlucky not to take the lead in the opening minute.

James Glancy rose well to meet a well delivered corner but the Real Tubber goalkeeper produced a fine save at the expense of another corner. From the next delivery Manor went even closer but on this occasion Colm Callinan was denied by the crossbar.

Despite the encouraging start it was the visitors who opened the scoring midway through the first half.

Questions will be asked about the space afforded to Dylan Henry and the Tubber man took full advantage as he delivered a composed finish past Colin Gilligan.

After a heavy defeat at the hands of City Utd a few days earlier in their final league game the Manor Rangers players may have felt their season was destined to finish with a whimper but they wasted no time feeling sorry for themselves.

In fact it took just four minutes for Manor to restore parity.

Brian McDonald and Aaron Hickey linked up well before the game’s star performer, Colm Callinan found Seamus Ryder. The powerful forward, whose goals have played such a pivotal role in Manor Rangers’ season let the ball roll across his body before dispatching his shot past the Real Tubber goalkeeper.

Manor had further chances to edge in front with Adrian Croal, Alan Harvey, Callinan and Ryder all seeing chances come to nothing.

Despite those missed opportunities they didn’t have to wait too much longer for a second goal.

Colm Callinan shone in a free role and after he was found by Adrian Croal he shaped as if he was going to shoot with his right only to quickly switch to his left and from the edge of the box he found the Tubber net to give Manor a deserved lead.

Having fought to establish a lead, Manor opened up a two goal cushion 8 minutes later with Colm Callinan providing a wonderful finish at the end of a move that began with goalkeeper Colin Gilligan.

Thomas McDonald, James Glancy and Brian McDonald were all heavily involved in the crisp passing move and when the ball arrived at the feet of Alan Harvey, the left back delivered a perfect delivery to find Callinan at the back post.

Callinan displayed great athleticism and no little skill as he delivered a scissors kick to the Real Tubber goal to put Manor Rangers well in truly in the driving seat.

With the comfort of a two goal lead as the first half came to an end there was every reason for Manor Rangers to be satisfied with the opening 45 minutes but they will not be particularly pleased with the manner in which they began the second half.

Mark Burke produced a wonderful, low strike to beat Colin Gilligan after a near post corner, just two minutes into the second half.

This was not to signal the start of a Real Tubber revival as the two goal advantage was restored when Seamus Ryder struck for his second goal of the game.

Victory and a place in the semi-final of the Radisson BLU WB Yeats Cup was secured when Aaron Hickey, who excelled at right-back struck for Manor’s fifth goal.

Substitute Hassan Aajip, playing his final game of the season had a late chance but Manor will be happy with the win and the performance as they look forward to Sunday’s semi-final against either Calry Bohs or Yeats Utd.