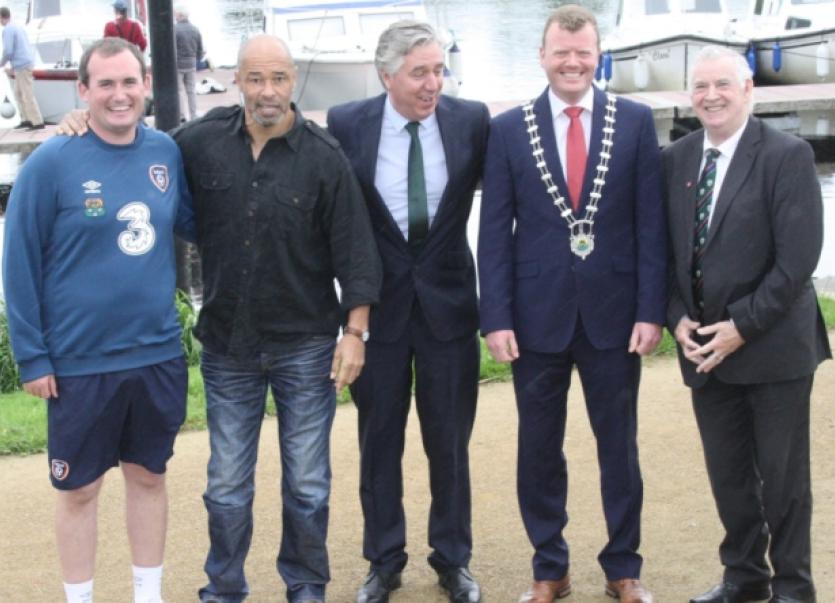 After a busy day that saw him visit Ballinamore, Carrick-on-Shannon and Manorhamilton last Sunday, FAI CEO John Delaney offered his assessment on what he described as “a brilliant day.”

After a busy day that saw him visit Ballinamore, Carrick-on-Shannon and Manorhamilton last Sunday, FAI CEO John Delaney offered his assessment on what he described as “a brilliant day.”

“The idea of a festival of football is something we came up with eight or nine years ago, go out and meet the people and meet the clubs.

“It’s very easy for me or Paul McGrath to come down and visit the clubs, it’s our way of thanking the people who run the club, the coaches, the volunteers, the Clearys who we met this evening. It’s absolutely brilliant and the warmth of welcome from the three clubs was outstanding.

After watching an exhibition match between the Irish amputee team and Manor Rangers, Delaney spoke about the role of the Manorhamilton club in the community and how the FAI have been trying to assist them along the way.

“Richard Fahey, our head of facilities has been dealing with the club on a regular basis. I hadn’t been to the club before but I had met them several times and it is great to see the reality of what they have been talking about and how we have been trying to assist them.

“It is fantastic to see the all-weather pitch and a lovely soccer pitch beside it on the community grounds with the tennis courts and GAA pitch beside it.

“The communal dressing rooms are fantastic and they have a grant application in for crazy golf which adds another feature. When you put that complex together, not just as a football man but as a sports man you see tennis, GAA, soccer and hopefully a crazy golf facility as well so well done to everybody.”

He stressed the visit to the clubs of Sligo and Leitrim, which continue throughout the week ahead of Saturday’s AGM in Sligo, are not political but rather an opportunity to discover how the association can be of assistance to clubs.

“It’s paramount for us to be aware of what is going on here and to help. These aren’t what I would term political visits, not that politics is the right phrase to use. This is me coming here to see what they are doing and to help them and to see what they want to do.

“We have seen three clubs today, you would love to see more clubs in Leitrim. Manorhamilton has a big catchment area with nearly 200 kids playing soccer within the academy, boys and girls. That is an incredible facility to have. To be here and to be aware and to see what they are doing is important but also to help them.

“At previous AGM’s where we have gone to counties like Clare, Monaghan, Donegal and Wexford there has been real engagement in the years afterwards. You become aware of what the clubs want to do to develop. Once we know what they want to do we will try to help them.”

With in the region of 200 children playing football with Manor Rangers, John Delaney did say he hopes that in the future one of those players may end up wearing the Irish green jersey and feels the introduction of an U-17 national league should be seen as an attainable goal for young players pointing to the example of Seamus Coleman as an inspiration for young players.

“Wouldn’t it be great for someone from Leitrim to play for the Republic of Ireland at senior level. If that happens they become the icon, the beacon for all the children in the country.