Trap feels at home on visit to Carrick 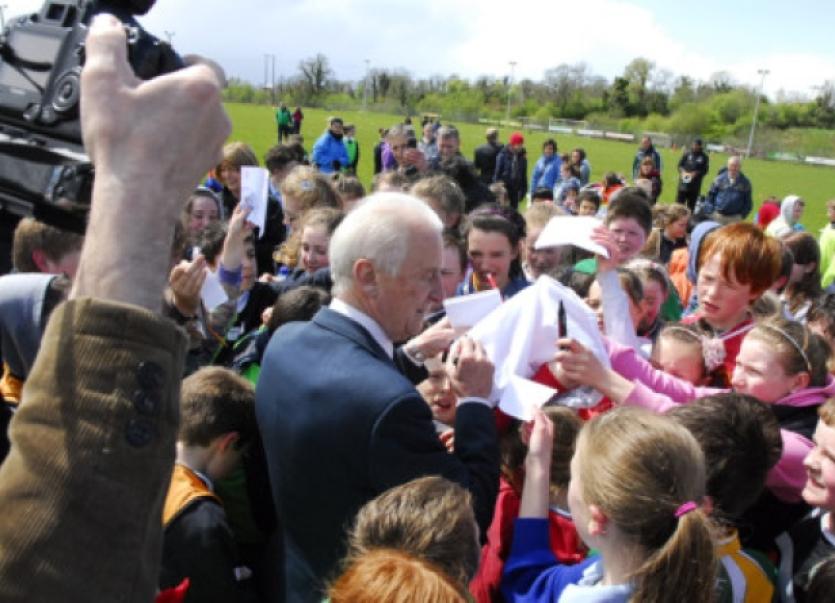 Having been grilled for over an hour by the nation’s media about the merits of Anthony Pilkington on the left wing, the dilemma regarding player fatigue ahead of the forthcoming matches and the international future of Richard Dunne, Republic of Ireland manager Giovanni Trapattoni spoke warmly about his first visit to Carrick-on-Shannon.

Having been grilled for over an hour by the nation’s media about the merits of Anthony Pilkington on the left wing, the dilemma regarding player fatigue ahead of the forthcoming matches and the international future of Richard Dunne, Republic of Ireland manager Giovanni Trapattoni spoke warmly about his first visit to Carrick-on-Shannon.

The Ireland manager was in town to announce his 28 man squad for the forthcoming games against England, Georgia, Faroe Islands and Spain as part of the ongoing celebrations for Carrick 400 and he certainly seemed taken by Leitrim’s county town.

Speaking after being presented with a portait of himself the Italian, in his own unique version of English said, “I am very proud to be in Carrick. I have been to many other towns and cities and every town is a surprise. This village or town reminds me I was born in a location like this. I know the people, I know the mentality and I am very happy to be here with you.”

The formalities began with Cllr Enda Stenson issuing a warm welcome to the former Italy, Bayern Munich, AC Milan, Inter Milan and Juventus manager saying, “This town is synonymous with excellence. It is probably an omen of good luck to Giovanni, Marco and the squad” before adding, “Leitrim people are all soccer mad people and we were all probably a small bit proud of Wigan won the FA Cup, we all love the underdog.”

As the press conference got underway and the questions kept coming the 74 year old, with the aid of FAI Director of Communications Peter Sherrard who was acting as translator, spoke passionately about his belief in the current Irish team and the players and the importance of international football to them _ “It’s your country, the green shirt is very important,” he stressed. “We must be proud, I am proud to be the Irish manager, the players must be proud to be an Irish player. I put no limit on our performance or possibility. I believe in this team. We are not Messi or Ronaldo but our attitude is our strength.”

With the electronic, press and Sunday media outlets all grilling the man known affectionately as ‘Trap’ for over an hour the next challenge facing him was to pose for a never ending series of photographs and sign numerous objects. However, to his credit, this process didn’t seem to phase him the slightest and all requests were met with a smile.

Watching the proceedings from a distance Trap’s assistant Marco Tardelli, the man who famously scored for Italy in the 1982 World Cup Final in which Italy defeated Germany let the manager answer the questions and sign the autographs. When the formalities in Carrick-on-Shannon were completed Trapattoni and Tardelli were whisked away to Leitrim Village where they were introduced to the children who were participating in the Goal for Peace programme. The Goal for Peace programme is a novel programme, run only in Leitrim, bringing together children from catholic and protestant backgrounds from 10 schools in Leitrim and Fermanagh through the medium of football. This programme has been so successful that a follow-up programme is now starting with a further 10 schools participating in the Goal to Friendship programme.

While Giovanni Trapattoni was the centre of attention and doing his best to sign everything from pieces of paper to water bottles Marco Tardelli stood back from the limelight and happily spoke to the Leitrim Observer about the welcome he and the manager received from nearly 250 children saying, “It is very important for these children that Trapattoni is here. We have a player, Ciaran Clarke, whose family are from here and I think it is a good thing to come here for the announcement of the squad and it is important for this academy.”

Another player with close ties to the area, Seamus Coleman, was picked as Marco as a perfect role model for the young players present in Leitrim Village who may have aspirations to represent their country in the same manner as the former Sligo Rovers player has - “I think Coleman is for the new generation the best because he plays with Everton and he plays very well. He is a skilful player and he can be an example for the young player.”

Looking ahead to the remaining games in the summer and the bid to secure world cup qualification Marco stressed, “We are positive but it is also very tough to achieve the world cup but everything is possible if the players are fit, I’m sure we can match.”