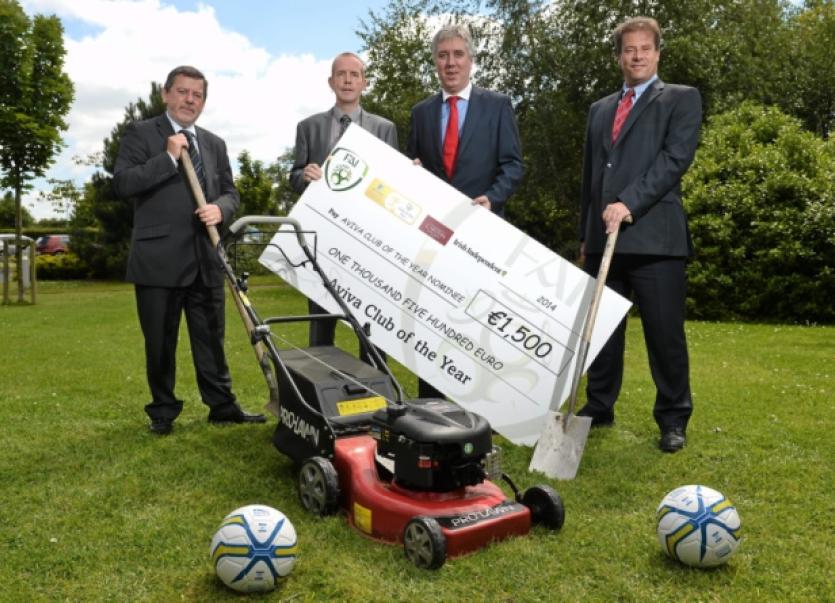 Manor Rangers have secured a nomination for the prestigious Aviva FAI Club of the Year Award.

Manor Rangers have secured a nomination for the prestigious Aviva FAI Club of the Year Award.

The club was one of eight that have been nominated for this year’s award which recognises and rewards Irish soccer clubs from all over the country who have shown outstanding progress in the development of their club this year.

This year’s award has been changed to reflect Ireland’s finest clubs across the season in four different categories of excellence: Coach Education, Work in the Community, Underage Participation, and Club Development & Facilities.

Manor Rangers received their nomination in the Community category alongside Geraldines FC from Limerick and secured a cheque of €1,500 for the club for their nomination.

Bernie Cleary, Manor Rangers FC, said “This is great recognition from the FAI as the county wouldn’t focus on soccer as a predominant sport. As a club we are hugely community focused and we integrate with other clubs as much as possible, sharing our facilities.

“To win the Aviva Club of the Year would mean a great amount to us. Not only would it raise our status as the “go-to” club but the funding would enable us to expand our reach in terms of connecting the community.”

The other nominees are Drogheda Boys FC and Kilnamanagh AFC in Coach Education. Mervue United and Home Farm are nominated for Facilities and Development, while Trim Celtic and Inter Kenmare are shortlisted for Participation.

The eight clubs were at the Club of the Year Nominees Lunch in the Carlton Hotel in Dublin to receive their awards and a cheque for €1,500 for their club as reward for their nomination.

They will now go forward for the Aviva FAI Club of the Year award which will be decided on July 25, as part of the FAI AGM weekend.

Each of the eight clubs will then have the opportunity to present directly to the judging panel, which is headed by Donal Conway, Chairman of the FAI Underage Committee and includes representatives from FAI club Development, Carlton Hotels, Dublin City Council and Aviva.

The winning club will then be named Aviva Club of the Year for 2014 and receive a cheque for €5,000.

Mark Russell, Group Sponsorship Manager, Aviva, said “The Aviva Club of the Year is an initiative that helps support the very root of Irish football. It gives a helping hand to clubs all over the country who are doing great work in club development and recognises the key roles they are playing in their community.

“These eight clubs are the heart of their communities with everyone giving of their own time to make these clubs work. They are all extremely deserving nominees for the Aviva Club of the Year and it’s a great chance for them to secure €5,000 for their club in July.”

John Delaney, Chief Executive, FAI, said “The standard of entry to the Aviva Club of the Year is exceptional. The eight clubs shortlisted should be immensely proud of their achievement in getting this far and they fully deserve the national recognition and their cheques for €1,500.

“Since the Aviva Club of the Year competition started, it has been successful in raising the standards at our clubs to new levels. The national spread of this year’s finalists shows that our clubs are developing in every part of the country. That is of tremendous importance for the coming generations of Irish players.”

Aviva, who are sponsor of the Club of the Year, are also involved in several other grassroots football programmes encouraging the growth of the game across the country. These include the FAI Junior Cup, Soccer Sisters and the FAI Primary School 5’s. More information about the Aviva Club of the Year Award is available from www.FAI.ie and www.Aviva.ie/COTY