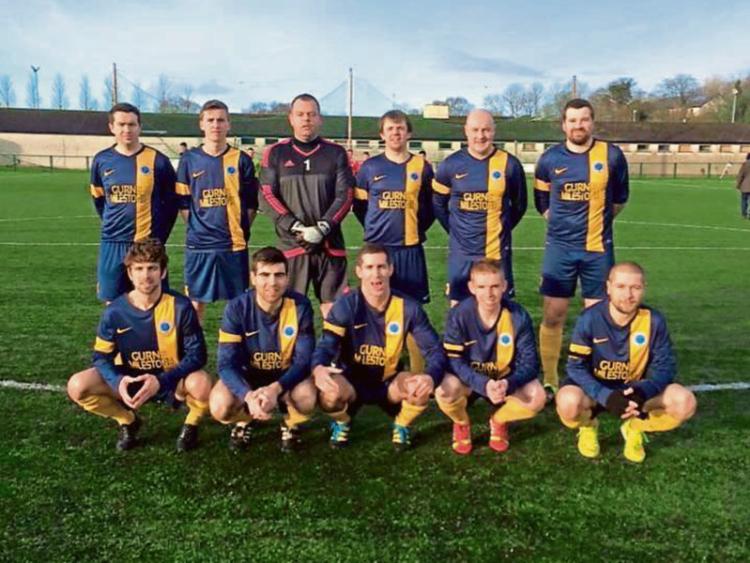 Manor Rangers suffered an agonising defeat on Saturday evening last when, in bizarre and cruel circumstances, two Manor Rangers players collided with each other and Boyle's Conor Deery was on hand to score the decisive goal.

Manor would have been disappointed if they had to settle for a share of the spoils but that solitary goal subjected them to a defeat which did not reflect their efforts, particularly in the second half.

The opening half was a cagey affair with defences on top. Thomas McDonald was on top form for Manor Rangers during that opening period.

After almost two months without a competitive fixture Boyle would have been anxious to find their groove quickly and they did just. Conor Deery and Gerard McDermotroe kept the Manor defence on their toes as they linked up well on the left flank.

Dessie Carlos was the first to threaten the Manor goal but his shot from distance sailed harmlessly over.

Having weathered the early pressure from Boyle, Manor started to impose themselves on the game with Colin Ryan beginning to have more of an influence on proceedings. Manor's first attempt at goal came from Paddy Woulfe in the eight minute but his effort went over the Boyle goal.

The first half proved to be a real battle with little to separate the sides.

Luka Roddy shot wide for Boyle while at the other end Kevin Buckley showed good perseverance before unleashing a shot. On a wet and slippery pitch his effort could have been tricky for the Boyle netminder but Kyle Suffin made easy work of the long range effort.

Boyle arguably enjoyed the lions share of possession in the opening half but in terms of chances created there was nothing to separate the sides and with defences dominating, both would have been aware there was room for improvement from an attacking point of view.

The second half was barely a minute old when the best chance of the evening, to that point, fell to Seamus Ryder who was unmarked in the box after an excellent cross from Alan Hickey. Ryder's chest control was perfect but his volley was wide of the target.

Having survived that let off Boyle went on the attack themselves with Dessie Carlos rampaging down the right wing. His low cross fell kindly for Aaron Calpin but goalkeeper Paul Scanlon was alert to the danger and dived at Calpin's feet to smoother the ball.

Manor seemed to be growing in confidence as the game progressed and came close on a number of occasions to opening the scoring.

Eight minutes after the restart Seamus Ryder cut inside and lined up a shot from 35 yards out. The powerful forward couldn't have connected much better with his shot but Boyle goalkeeper Kyle Suffin prevented the ball from finding the top corner with a superb save.

Paddy Woulfe was beginning to have a bigger say in proceedings alongside Colin Ryan and Alan Hickey in a midfield that had looked over run on occasion in the opening half but now they were bossing matters.

Hickey's deliveries were causing plenty of problems for Boyle but again their goalkeeper was equal to everything Manor threw at him. A Seamus Ryder header was well saved before Suffin got done low to somehow save what seemed an inevitable goal for Kevin Buckley.

Having seen so many chances come and go the fear for Manor was that they were in danger of being caught by a sucker punch and that is exactly what happened with eight minutes to go.

A long ball over the top seemed as though it would present few difficulties for Manor but centre-back Thomas McDonald and goalkeeper Paul Scanlon managed only to clatter into each other as they attempted to clear the ball allowing Conor Deery to score into an empty net.

That proved to be the only goal of the game, condemning Manor to an incredibly frustrating defeat but very much keeping Boyle in contention for the Super League title.