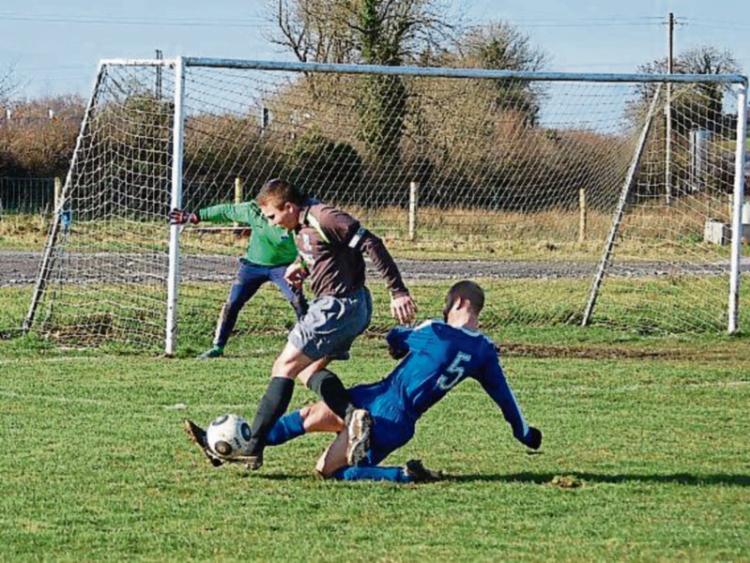 The Carrick Town U14s came up against a strong Benbulben side at Sligo IT astro turf pitch on Saturday last.

Playing against the wind in the first half Carrick defended well but soon found themselves 2-0 down after a speculative long range shot squirmed in of the post.

The second came soon after when a corner kick somehow caught Carrick at the near post. Things got a little worse when Benbulben made it 3-0. Carrick never gave up and were rewarded for their work with a penalty after Oliver Charles was pulled back in the area.

Cormac White's kick was saved but he was there to put in the rebound to make it 3-1.

The second half started in much the same way with Benbulben grabbing another 2 goals to make it 5-1.

Carrick never gave up and a goals from Evan Corcoran and Cormac White brought it back to 5-3. Carrick were inches away from a fourth on a couple of occasions and were on the front foot but it wasn't to be.

Benbulben got another in the last minute as Carrick threw everything at them.

Although a disappointing result, each and every lad gave 100% and never stopped fighting for their team. More performances like this and the lads wont be far away at the end of the season.

Carrick Town lost ground on the leaders at the top of the Andrew Mullen Sligo Pallets Premier League when they hosted Coolaney United on Sunday last.

Despite Niall Comerton scoring from the penalty spot for Carrick Town they were held to a draw with a battling display from the visitors who scored with a great goal through Jakub Brayewski.

As part of the Club's 40 Anniversary a night of celebration has been planned to coincide with the Carrick Carnival and will take place on the 10th June in The Landmark Hotel. All players, past and present, supporters and friends of the club are invited to attend. (More details later). If anyone has any old photographs, memorabilia or interesting clippings please contact Frankie (087) 9817288 or any club member.