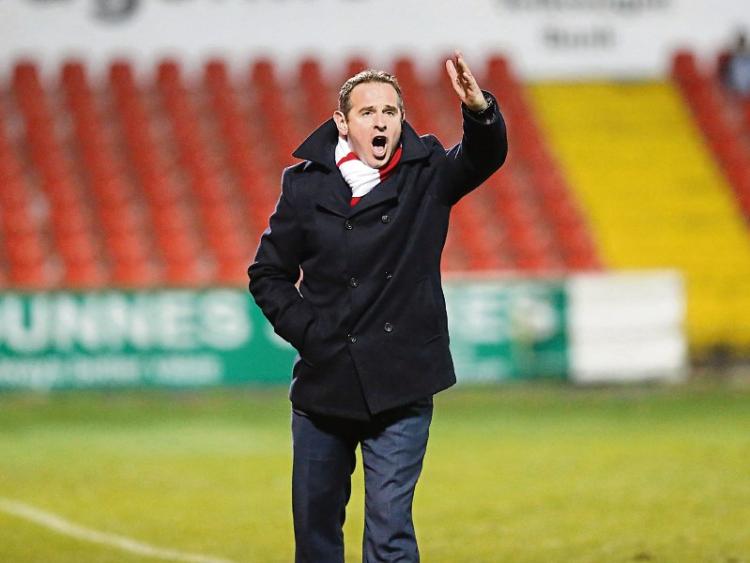 Since Ian Baraclough led Sligo Rovers to the SSE Airtricity League Premier Division title in 2012, there have been five different managers or caretaker managers looking to return the Bit O'Red to the upper reaches of the league.

John Coleman, Gavin Dykes, Owen Heary, Joseph Ndo and Micky Adams have all come and gone and now former Peterborough manager Dave Robertson is the man charged with attempting to revive the fortunes of the club.

Sligo Rovers have often looked to England for both managers and players but from when he was appointed last November it became apparent that Robertson wasn't viewing relocation to the north-west as an interlude before returning to England. He views re-establishing Sligo Rovers as a top side as a long term project but it is a project he wants to be fully involved in.

Having taken on the job of Sligo Rovers manager Robertson was then tasked with assembling a back room team and squad but more importantly ensuring that his family would be happy in their new location outside Carrick-on-Shannon and over a cup of coffee last week he revealed the move has gone great so far.

“The family have all moved over, my wife and the two kids and they have settled into life in Leitrim really well and we’re really enjoying it. It’s a fantastic place to live and we’re really looking forward to the next few years.”

With domestic matters sorted Dave was also tasked with rebuilding a squad after what was a disappointing season for Sligo Rovers as they came too close to relegation for comfort.

Retained from last year are experienced campaigners such as Tim Clancy, John Russell, Raffaele Cretaro and Gavin Peers. Also contracts have been offered to a number of players such as Gary Boylan, Regan Donelon and Gary Armstrong who featured regularly last year having progressed from the U-19 team.

Discussing the process of assembling a new team Dave recalled, “It was a big challenge when I first took the job on November 19.

“There was no management staff in place so first of all I needed to build the management team to make sure that the support structures were there and in place for the players to give them what they need to be successful every week and then beyond that. There was a lot of business in terms of recruiting players and recruiting the right types of players.

“I wanted players who were hungry and had a real desire for success and were motivated by that, because I think if you marry that with what there is at Sligo Rovers and the fantastic support - not only in Sligo but the surrounding areas - then I think it is a recipe to make us a real competitive force.”

Players such as Tobi Adebayo-Rowling, Craig Roddan, Jimmy Keohane, Kieran Sadlier and Jaanai Gordon have bolstered the squad and from the performances in the “meticulously designed pre-season” it would appear as though the 2016 crop of Sligo Rovers players are certainly going to provide plenty of entertainment.

When asked what those who may be unfamiliar with the League of Ireland could expect from his team, starting this Saturday night in The Showgrounds against Shamrock Rovers, Dave, who developed a reputation as being highly talented at developing young talent at Peterborough, insisted those who follow his teams fortunes will be entertained.

He also referred to the success of Seamus Coleman suggesting a future star or two may be wearing the Sligo Rovers colours this year.

“It’s definitely going to be an exciting season with the players we’ve put together for the Sligo Rovers squad this year. We’re going to be playing exciting, attractive football but not only that, Sligo Rovers developed Seamus Coleman before he went on to Everton and within that group of hungry players that are in that 21-23 age group I think you might find there might be a few stars of the future.

“Maybe when you’re watching Premier League or international games they might pop up on the screen and it is an opportunity for people in the Leitrim and Sligo area to see them before they hit those levels.”

With the pre-season programme completed Dave stated he has a good idea of his starting 11 for Saturday's opener at The Showgrounds and gave an insight into his style of play and the difficulties it could present for opponents.

“Movement, energy and pace were three key factors I needed to get into the squad. We have worked with them during pre-season to improve and develop those energy levels because for us, we need to set our standards as high as we possibly can and then maintain them throughout the year.

“Our movement patterns and what we’ve been working on in training are starting to come good and I think it is a different way of playing to what a lot of League of Ireland teams would be used to and it will be interesting to see how that fares in the opening five or six games of the season.

“The full-backs getting high, the movement of the midfielders, the forwards pulling off the shoulders and being a real threat in behind but the key thing is how we play.”

Dave feels the style of play his team will bring to the league offers a flexibility that will cause problems for opponents.

“We play with no fixed positions, you will see a lot of movement and rotation within the team. That’s what causes teams dilemmas because if they are not organised, if they are not able to cope with that it gives an edge and an advantage over our opposition.”

When pushed on where Sligo Rovers may finish this year Dave suggested a mid-table finish would be acceptable.

“There is definitely going to be no wild aspirations from us. I believe that we have a competitive squad and we need to be targeting to finish in mid table.”

Having assembled what he believes to be a talented group of players, Dave feels an equally important attribute is the honesty and commitment that is present within the group and he believes supporters who visit The Showgrounds throughout the season won't be disappointed.

“The one thing this group of players will do is they are an honest, hard working bunch and they will give everything they have got week in, week out.”