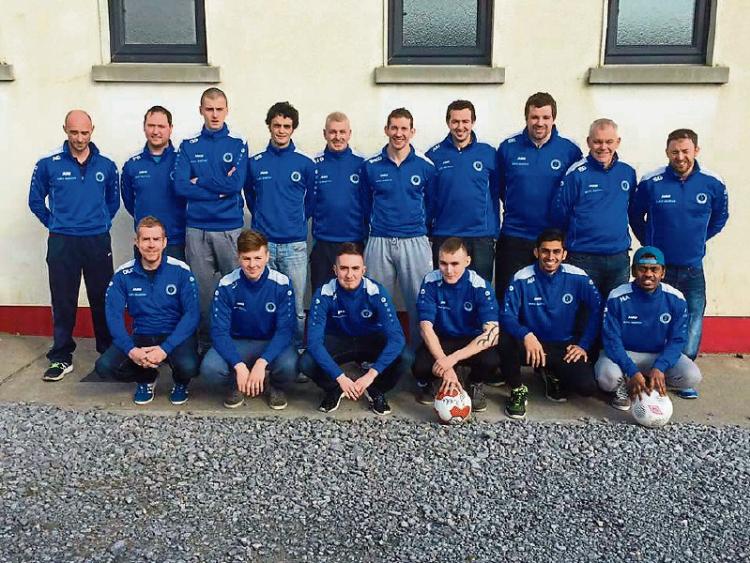 Understrength they may have been, Manor Rangers still advanced to the next round of the Connacht Cup following a convincing victory over Dynamo Blues in Tuam on Sunday last.

With a number of first team regulars unavailable manager Aaron Costello was forced to test the full strength of his squad and had to even name himself in the starting 11 for the fourth round clash.

Manor dictated matters from the off and opened the scoring within 10 minutes of the game getting underway.

After a foul on Richard Hewitt, Daniel Skimmin's dangerous delivery was headed to the net by Alan Hickey to give the north Leitrim side the perfect start.

The lead was almost doubled when player/manager Aaron Costello's quick throw found Seamus Ryder who in turn released Daniel Skimmin but unfortunately for Manor, Skimmin's well struck shot came back off the crossbar.

Dynamo Blues gave Manor a reminder that the game was still in the balance during those opening stages but the closest they came to opening their account was when a shot hit the upright.

That was to be a significant miss for Dynamo Blues as shortly afterwards Manor struck to double their advantage. An excellent cross from Richard Hewitt was met by the head of Daniel Skimmin who flicked the ball into the path of Seamus Ryder who powered his shot past the Dynamo goalkeeper to give Manor a two goal advantage.

During a physical opening half Manor continued to boss matter but were unable to further extend their advantage. Alan Hickey went closest to opening up a three goal lead but his shot, from a good position, flew wide.

Manor Rangers went a long way towards securing their place in the next round of the competition when they struck for a third goal in the opening stages of the second half.

Hassan Ajip was released by Daniel Skimmin before powering his shot past the Dynamo Blues goalkeeper.

The Galway side were presented with a way back into the contest when they were awarded a penalty but Manor goalkeeper Ali Alniyadi made a wonderful save to maintain his side's three goal advantage.

That save was to have an even greater significance moments later when Manor struck for their fourth goal.

Daniel Skimmin's free-kick was met by the head of Seamus Ryder and he guided the ball to the back of the net to put the result beyond doubt.

Victory may have been assured and a place in the next round guaranteed but there was no sign of Manor Rangers easing up as they continued the search for more goals.

The final goal of the afternoon was arguably the best as Manor Rangers combined excellently to carve their way through Dynamo Blues from back to front.

The move began with goalkeeper Ali Alniyadi whose clever distribution found Paul Boylan and he in turn picked out Seamus Ryder. After surveying his options Ryder then released Daniel Skimmin. After taking the ball around the goalkeeper Skimmin fired his shot to the net to put the gloss on a convincing victory.

Manor Rangers had further chances to increase their lead but all associated with the club will be more than happy with their afternoon's work in Galway as they advance to the next round of the Connacht Cup where they will face Corrib Celtic.