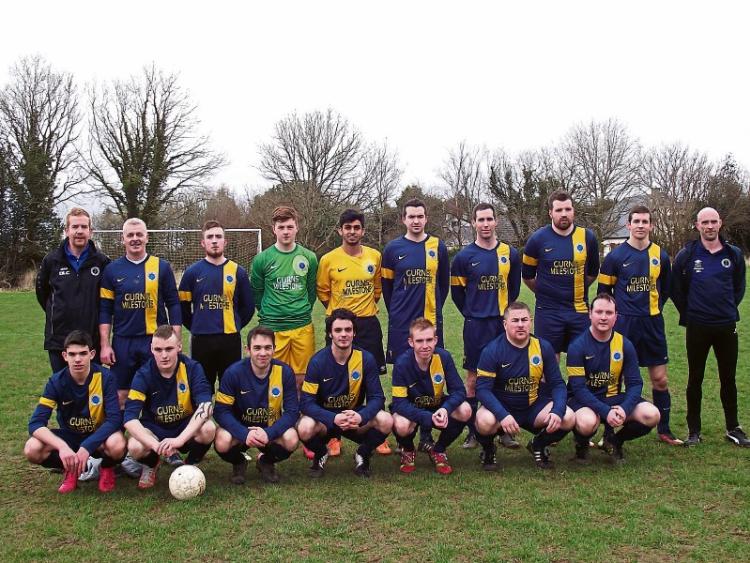 They may have been down a number of players for their trip to Galway to face Corrib Celtic in the fifth round of the Connacht Cup but once again Manor Rangers made light of their difficulties as they produced an heroic performance to book their place in the last eight of the competition.

A team featuring a healthy mix of youth and experience produced a performance full of commitment and passion and no little skill as they overcame all obstacles thrown in their path.

The hosts were quick to settle to the task at hand and almost struck for an early lead but Thomas McDonald was on hand to make a telling intervention as he cleared the ball off the line.

Manor's first sight of goal came from a Daniel Skimmin free but his delivery alluded everybody, including the Corrib goalkeeper, and sailed narrowly wide.

With other players unavailable Manor were able to welcome the talented Paddy Woulfe back to the team after injury but unfortunately his return was to be short lived as he was forced to withdraw from the action after 14 minutes and was replaced by Richie Hewitt.

Having made a wonderful save to deny Corrib the opening score, Ali Alniyadi made another good save moments later but will be disappointed that he was unable to divert the ball away from the in-rushing forward who was on hand to slot the rebound to the Manor goal.

Team captain, Alan Hickey, suffered an injury half an hour into the game but displaying the character that exists within the team he moved from midfield to forward and soldiered on. The subsequent re-shuffle saw Daniel Skimmin move to left-back where he excelled.

Approaching half time Manor were back on level terms when Thomas McDonald, who shone beside Joe Keaney at the heart of the defence, released Alan Hickey who made light of his injury to lob the ball over the Corrib goalkeeper and into the net for a deserved equaliser.

With just over half an hour remaining the game was stopped for a considerable length of time due to an injury to a Corrib player and when the game resumed Alan Hickey was presented with a chance to give Manor the lead but the Corrib netminder made a good save.

There was still time for plenty of drama as Corrib regained the lead following a ricochet in the Manor box with 17 minutes remaining.

Over the course of this cup run Manor have overcome many obstacles and once more they refused to throw in the towel.

Ali Alniyadi made a stunning save to keep just a goal between the sides and deep in injury time Alan Hickey thundered the ball to the Corrib net after a wonderful pass from Thomas McDonald.

Extra-time failed to separate the sides and after a tension filled penalty shoot-out it was Manor who triumphed with Alan Hickey, Seamus Ryder, Paul Boylan, Thomas McDonald and Colin Ryan all on target as Manor secured their place in the last eight.