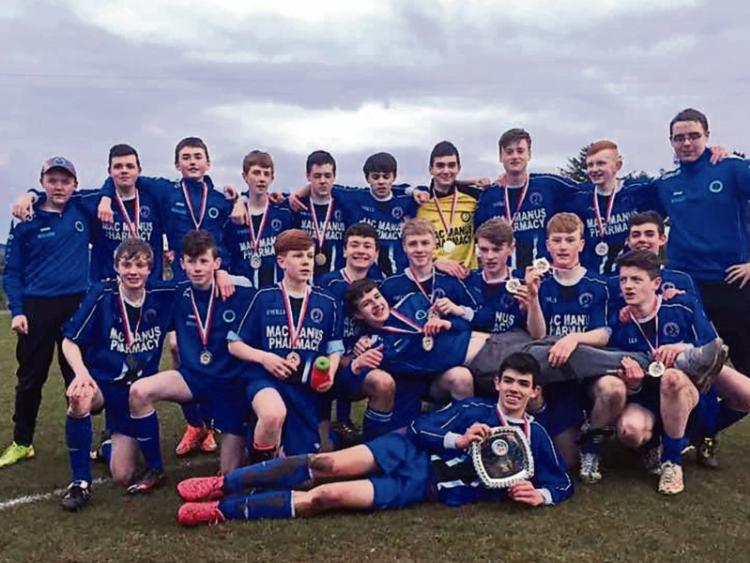 Manorhamilton Rangers U16 made the trip to Grange village last Thursday to take on Benbulben FC for the Sligo/Leitrim Division 1 league title.

It was a very hard fought encounter with the a contrast of styles between the teams. Benbulben were far more physical in size whilst the Manor lads were more skillful and faster.

Roared on by a substantial Manor crowd the North Leitrim lads dominated early possession with Manor front two Jack Kelly and Vincent Sweeney causing all sorts of problems for the Benbulben defence.

It was a game where both defences held solid for most of the game and the battle for possession took place in the middle of the park. Jack OConnell and Shane Walsh had a busy afternoon as they matched their counterparts in the middle with a number of crunching tackles made and taken.

Dylan Guihan and Mark McGee playing on either wing made telling runs and sent in numerous good quality crosses but the Benbulben lads with aerial superiority dealt with confidently.

Jack Kelly came close to opening the scoring for Manor when he latched onto a ball played in by Shane Walsh.

He sent his shot just wide of the upright. Manors back line had a busy afternoon but were more than a match for their striking opponents. Briain McGowan had his best performance in a Manor Rangers shirt clearing all that fell his way.

Joshua Davis belittled his size and showed great skill and vision not only defending but making telling runs into his opponents half.

Marcio Oliveira and Ross Harrisson were immense and cleared all.

Manor opened the scoring in the 29th minute following early pressure from Dylan Guihan which resulted in a Manor throw. Briain Mc Gowan found Vincent Sweeney on the wing. He turned and beat one defender before unleashing a brilliant twenty five yard strike which sailed over the Benbulben keepers head into the back of the net to put the Manor lads 1-0 ahead.

Manor never looked like conceding in the first half and so it proved to be. The second half saw Benbulben looking for an equaliser as they piled on the pressure.

Alex Mullins in the Manor goal brilliantly tipped over the crossbar a long range shot which seemed destined for the net.

Benbulben's pressure finally paid off when a cross into the Manor box was turned into their own net by a fiercely unlucky Ross Harrison for an equaliser. The game continued in the same vein with Manor having some half chances with free kicks from Shane Walsh and saved shots from Vincent Sweeney and Jack Kelly.

Benbulben found Alex Mullins in incredible form as they pushed on for a winner. The Manor keeper saved four one on one attempts from Benbulben to keep his teams hopes alive. The game finished 1-1 in normal time and neither side could break the deadlock in extra time. Alex Mullins again the hero with another brilliant save.

And so the dreaded penalty shootout began. Manor scored four of their penalties but cometh the hour cometh the man, Manor's keeper Alex Mullins saved two of Benbulen's penalties to secure a well deserved league title for the Manor side. It seemed like a long time back to August with the U16 team the first team back in training twice a week to now but the journey was well worth the wait. Congrats to all the lads.

Man of the match was Alex Mullins who was simply superb.

Manor Rangers would like to thank all who made the journey to Grange to support the team, turning the Grange venue into a home venue. They also expressed their gratitude to the U16 team sponsor John Mullins & Gala.