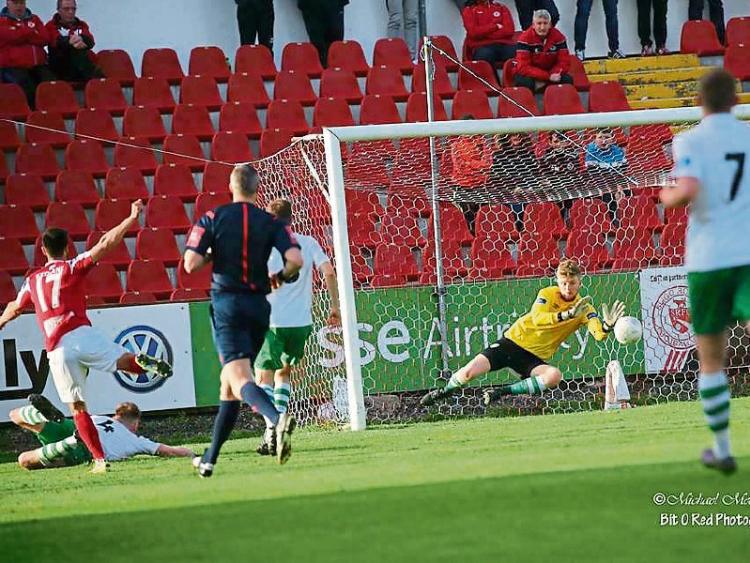 Sligo Rovers made sure there was no cup upset at The Showgrounds on Saturday night last when they comfortably saw off the challenge of Cabinteely.

Two goals from Kieran Sadlier, either side of a Jimmy Keohane strike were enough to secure a comfortable win for the hosts.

Manager Dave Robertson was able to name centre-back Gavin Peer in his starting 11 for the first time in a number of weeks following injury and he took his place at the heart of the defence alongside Mick Leahy. Regan Donelon who has impressed throughout much of the league campaign was rested meaning Gary Boylan moved from centre back where he has featured in recent weeks in the absence of Peers and Tim Clancy and he started the game at left back with Tobi Adebayo-Rowling continuing at right back.

There were also recalls for Chris Lyons and Janaai Gordon while Gary Armstrong was introduced from the bench for his first appearance of the season as Robertson utilised the depth within his squad.

The nature of the cup meant that while Rovers were expected to advance after their first ever meeting with Cabinteely it was a potential banana skin that needed to be overcome with a professional performance and that was exactly what the Bit 'O Red produced as they advanced to the third round.

In front of a crowd of just 852 the home side started brightly and deservedly opened the scoring in the 16th minute. Kieran Sadlier did well to create space for himself at the edge of the box before unleashing a shot which found its way to the back of the net although Cabinteely goalkeeper Michael Kelly may feel he should have done better.

Ten minutes later the game was all but ended as a contest when another of Rovers' stand-out performers on the night, Jimmy Keohane doubled the advantage for the home side with a dine individual effort.

The home supporters had to wait until the 66th minute for the third goal of the game to arrive and it was Sadlier who struck for his second goal of the night when his free kick evaded everybody and went straight into the net.

The visitors were unable to threaten Micheal Schlingermann's goal as the home side saw the game out for what was a comfortable win.

Reflecting on the game a satisfied Dave Robertson told sligorovers.com, “We said that we wanted to make this a fortress. March 5 has been the last time that we lost any competitive fixture here. We have won the last four which is a real positive, upward curve and we want to maintain that.

“The players are working hard and fighting hard to do that. The key bit is that we are also keeping clean sheets while scoring goals. That’s a real positive for me again tonight, its three goals but another clean sheet. It’s an area where we are going in the right direction.”