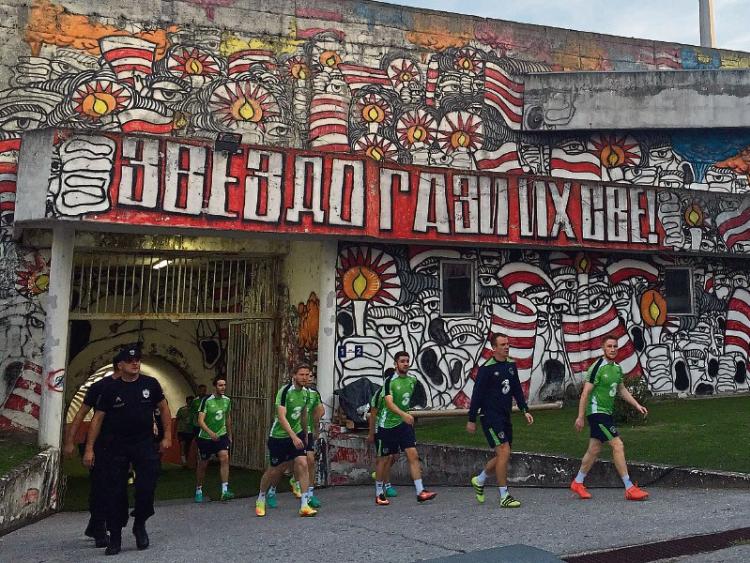 It seems no matter how much planning goes into preparing a team for action, there is nothing you can do when the elements undo the work of managers, players and ground staff and prevent games from going ahead.

The past few days has seen a number of games fall foul of the weather with two SSE Airtricty League games taken victim by the heavy downpour on Saturday and then on Monday last Ireland’s start to their World Cup qualifying campaign almost got off to a false start when the game was in doubt due to the heavy rain in Belgrade.

Longford Town were due to host Bray Wanderers on Saturday evening but the normally excellent pitch at City Calling Stadium was unable to withstand the amount of rain that fell and the decision was taken to postpone the game.

In Sligo they fared slightly better as the game did get under way. Manorhamilton’s Joe Cleary and his team worked tirelessly to ensure Sligo Rovers' game against Finn Harps would kick-off as scheduled. The game did indeed begin on time but it soon became apparent that it was a real possibility the game would be in jeopardy long before the 90th minute.

Reports of players sliding across the pitch and the ball getting stuck in puddles meant the referee, Sean Grant, had little option but to abandon the game. Those attending, or playing games in Leitrim on Saturday evening will be only too aware of just how difficult playing conditions were.

The adverse weather also played havoc with Ireland’s start to their latest qualifying campaign as the game against Serbia was only given the green light 90 minutes before kick-off. When the game did get underway it quickly became apparent that the pitch, with large divots multiplying by the minute, was showing the effects of the downpour that had threatened the game.

When the game got underway the conditions were soon forgotten as Jeff Hendrick's third minute strike gave Ireland an ideal start. It was hoped Ireland would be able to grow in confidence and play with authority but they failed to build on that bright start. There were encouraging moments during the opening half but as the game progressed Ireland sat deeper and their composure on the ball seemed to disappear as they frantically looked to clear the ball as far up the pitch as possible.

Martin O'Neill has taken the majority of the criticism for the style of play but in reality it has been a feature of performances for some time. Start well, score a goal, sit back, defend the lead, concede and then fight back into the contest.

In the last campaign, away games against Scotland and Poland saw Ireland struggle to maintain possession while the away game against Germany was salvaged with a late John O'Shea strike and the game in Georgia was won at the death courtesy of a stunning strike from Aiden McGeady.

The memories of performances full of authority in France during the summer gave hope that, with a generation of exciting, young players stepping up to the role of senior internationals, Ireland could take the game to their opponents on Monday night. The starting XI was encouraging but it would seem Ireland still struggle to play with real composure when Wes Hoolahan is not on the pitch.

Ultimately it would be hard to disagree with the pundits who said it was a poor performance with plenty of mistakes but it would also be hard not to agree with Martin O'Neill who insisted the point earned in Belgrade courtesy of Daryl Murphy's first goal for his country could, in time, be hugely significant.

Up next for Ireland is a home game against Georgia on October 6. Ireland fans will be looking for an improved performance and for the midfielders to make better use of the ball but Martin O'Neill's first priority will be to ensure three points.

It's a long road to Russia and the early qualifying performances will be of little relevance should the team advance to the World Cup.