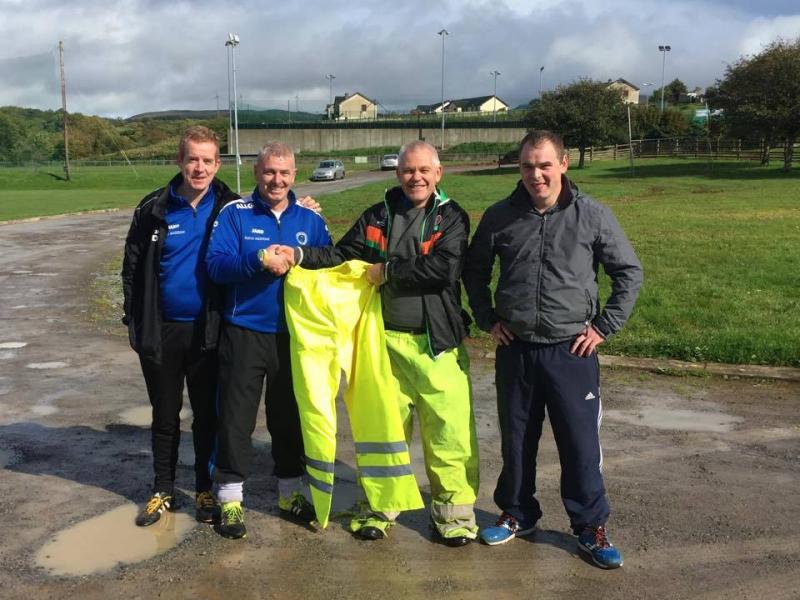 Prior to the game both sides paused for a minute's silence in memory of Mark Rooney.

Playing at the Bee Park for the first time this season, Manor Rangers picked up their first points of the campaign in style as they hit Glenview Stars for seven. David Skimmin and Alan Hickey each scored two with Robbie Cunningham, Paddy Woulfe and Paul Lonican each grabbing a goal.

Glenview Stars scored twice late in the game courtesy of Seamus O'Boyle and Clive Brennan but the day and points belonged to Manor.

Strand Celtic welcomed St John’s to a windswept Strandhill last Friday night in the Super League clash. Both sides have started the season well and so a tight game was on the cards but in the end Strand were dealt the better hand. Mark McCallion put Strand ahead on 20 minutes and St John’s levelled matters ten minutes later when Malachy Spratt fired home.

Then just before half time Brendan Fitzsimmons picked up a second yellow card and referee Tomas Oates gave him his marching orders. This left St John's down to ten men against a very strong breeze so it was a rear-guard action for them.

Strand were awarded a penalty on the hour and up stepped Glen Mc Cormack who hit a great effort but Colin Donegan took off a brilliant save to keep St Johns in the hunt. However, 20 minutes from time, Ryan McManus struck gold with a superb finish that wrapped up the points for the sea siders and puts them into third spot on the leader board.

Carbury stay top, once again defeating Boyle Celtic by the narrowest of margins. A 30 yard strike eight minutes to half time from Dylan Edwards was held and then dropped by Boyle net minder Kyle Suffin to give Carbury the points.

Boyle Celtic put up a massive fight but the loss of Lee McKillen to a knee injury early in the first half made it a difficult game for the defending champions against a very good Carbury team.

Ballisodare United showed their mettle as they went two goals behind away to Aughanagh Celtic with Dermot Beggan bagging a brace in style. Ballisodare were given a lifeline just before the break when they were awarded a penalty, dispatched in style by Conor Davey.

Andrew Patton added to his tally early in the second half and levelling affairs for Ballisodare who then pushed on adding a goal each from Nathan Hargadon and Michael Casey that wrapped up the points and puts Ballisodare second on the leader board.

Calry Bohs welcomed Yeats United to Hazelwood with a strike from Mark Hynes giving them the lead at the interval. Yeats United stepped up a gear in the second half and Alan O'Dowd crashed home to superb goals that looked good enough to earn Yeats their first points of the season.

Calry never gave up the chase and were rewarded on the stroke of fulltime when Paddy Heraughty fired home a glorious equaliser to insure a share of the points in a great game where both sides gave it their all.

Ballygawley Celtic are fighting hard to maintain their leadership of the Sligo Pallets Premier League they hit Coolaney United for four without reply at the Astro itch in Cleveragh.

James Mackey and Ross McLaughlin had them two up at the halfway stage and a goal each from Gary Fowley and Paul Flanagan completed the business of the day for an inform Ballygawley Celtic.

Cliffoney Celtic stay in second spot by the smallest of goal differences they won the local derby and bragging rights when blitzing neighbours Benbulben FC by six goals to nil with a hat-trick each for Alan Harrison and Niall Thomas.

The victory sets things up nicely for the clash of titans Sunday next when Cliffoney welcome the leaders Ballygawley Celtic to Mullaghmore standing room only and not a game for the faint of heart.

MCR, in third spot, will be among the honours this year if they can maintain their blistering form as they hit eight past Gurteen Celtic at Sean Fallon Park. Joe Cobbe grabbing a hat trick along with strikes from Stephen Hallahan, Ciaran Harvey, Dario Williams, Fatih Hamiani and the evergreen Gary Funston rounding off the scoring for a rampant MCR.

Gurteen Celtic, despite the battering, never gave up the fight and scored once thanks to James O Hara.

Merville United must be delighted with his young guns who are grinding out results against some very experienced sides. This time they won by the odd goal in seven at the Astro in Cleveragh against a very strong Carrick Town. Heroes for Merville were Bradley Fowley Ryan Feeney and a double from Graham Irwin.

Town replied with the big man Niall Comerton, Michael Corrigan and Conor Silke on the mark but this result now see’s Merville United in fourth spot.

Real Tubber in eight position took on neighbours Chaffpool United three places above them on the leader board but it was Real Tubber who put in their best performance of the season so far to win this local derby clash in a game that had everything. Cian Mc Ginty, Matthew Mulhern, Fabio Cretaro and Jason Perry were the hit men for Real Tubber while Gerard Mullarkey and Jason Marren were on target for the Pool.

In the FAI Umbro Junior Cup 2nd Round St John’s FC are at home Lough Harp and MCR FC are at home to Ballinasloe Town. Ballisodare United are away to Castlerea Celtic, Manor Rangers away to Cloonfad FC and Boyle Celtic away Ballaghaderreen FC. All KO 2pm.

The above games sees the cream of Roscommon and Sligo Leitrim Clubs in action so wish all clubs a great game of football in what promises to be an exciting weekend of Cup encounters. All games are decided on the day.