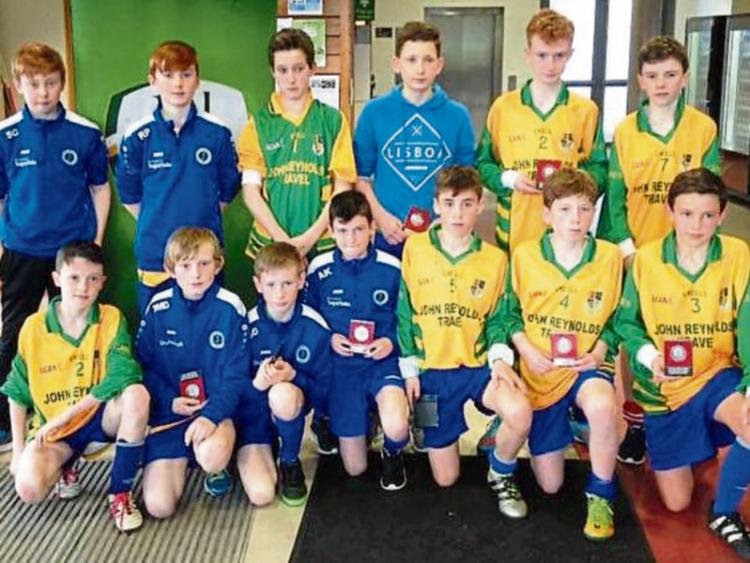 The St. Clare’s team who finished 2nd in the FAI Schools Connacht Futsal Finals in IT Sligo’s Knocknarea Area. The school’s girls team missed out on a place in the final by a point & finished 3rd.

Manor Rangers fixture programme may have been decimated at the weekend by the weather but there were important victories for the club’s U15 & 17 boys teams.

The U15 side took Leitrim bragging rights when they recovered from an early goal to run out convincing winners over Carrick Town while the U17 did the same, falling behind early to Valley Rovers before winning comfortably.

U15: The Leitrim derby at U15 level opened with Carrick Town finding the net early through Cormac White but Manor Rangers were soon back on level terms when a great ball in from Darren Gilmartin found Oran Gethins who rounded the keeper to equalise.

Manor quickly went in front when a super ball over the top from Nathan McMorrow was latched onto by Oran Gethins and his superb lob from 20 yards went straight to the net.

Carrick Town equalised through Carlos Gonzalez but Manor players and supporters protested that the referee had missed a handball in the lead up to the goal.

However, a great individual Aidan Rock goal that saw him come in from the wing before firing to the net from 15 yards restored the lead and the lead was doubled when Gilmartin and Rock combined to put Gethins through. The Carrick keeper made a good save but Gethins was able to force home the rebound for his hat-trick.

All the goals came in the first half with no further scores as Manor Rangers will be happy with some great passages of play and some very impressive individual displays.

U17: Manor Rangers found themselves behind against Valley Rovers but an equaliser from the penalty spot from Shane Walsh saw the north Leitrim men back on terms. Jack Kelly then found Vincent Sweeney who beat the defender before shooting past the keeper for the lead.

Sweeney almost added to his tally when his great diving header from a Shane Walsh cross was cleared off the line.

Futsal Finals: Congratulations to the teams from St. Clare’s Comprehensive who performed so well at the FAI Schools Connacht Futsal Finals at IT Sligo last week. Great displays from all the teams including the St. Clare’s boys team who finished runners-up, losing out to Summerhill of Sligo in the final and the Girls who narrowly missed out on the final by a single point to finish 3rd. Well done to all on their great displays.

Senior: Our Senior game was called off due to the weather. No game next weekend, next fixture is against Strand Celtic away on Sunday, December 4.