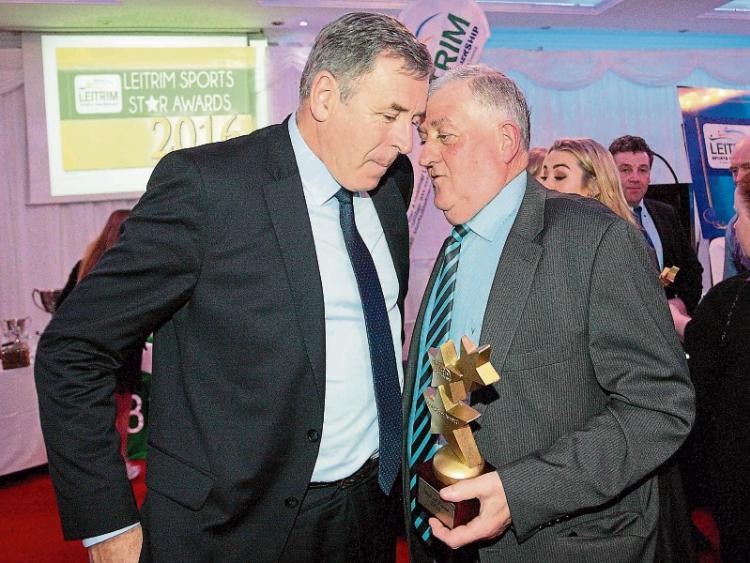 Down through the years, there are images that live long in the memory of any Irish sports fan, immediately conjuring up the magic of epic Irish triumphs.

For a Leitrim fan, Declan Darcy and Tom Gannon is one image that brings 1994 flooding back to life while just mention the names Sonia O’Sullivan, Katie Taylor, Dennis Taylor or Roy Keane and memories instantly come alive.

Mention the name Packie Bonner and for fans of a certain age, images of a leaping Donegal man celebrating the most famous penalty save in Irish sporting history immediately sporting to mind - almost as famous as the clenched teeth and look of pure determination before he launched the ball downfield to set in train Kevin Sheedy’s famous equaliser in Cagliari.

Packie was the special guest at this year’s Leitrim Sport Star Awards, his long-standing friendship with Leitrim Sports Partnership Co-ordinator and former Celtic player Declan Bonner ensuring he made the trip to Carrick-on-Shannon for the Awards.

Before he enthralled the audience with stories of his career and insights into what it takes to succeed in high level sport, Packie sat down with the Leitrim Observer and we got his views on the domestic soccer scene, where the game is heading now and Ireland’s chances of qualifying for the World Cup.

First and foremost, Packie was delighted to take part in the Awards ceremony, stressing the importance of recognising the achievements of young people - “It does give young people that confidence and if you have goals set that you want to achieve something, this here will help you maintain that or set new ones.”

Looking back on footage of Packie’s great games, what strikes you is how much the role of the goalkeeper has changed with the introduction of the backpass rule and the Donegal man agrees it has completely changed the requirements of the man between the posts.

“It has completely changed, it is all about being part of the team nowadays,” says Packie as he recalls a career that spanned 642 games with Celtic and 80 International caps, adding “When you look back at my day, it was about saving the ball, taking the cross, all about communication, being strong and aggressive. Now it is about 70% about playing with your feet, almost an outfield player playing in goal.”

That naturally leads to the question - would you have liked to play under those rules? “I think if I grew up with it, it’d be fine but I had to retire quickly when it happened. 1993 it came in and I was retired in 1996 so I had three years of it. People didn’t realise what it was about because people kicked the ball back to the keeper and then ran away.

“Now people have to create the right angles, the goalkeeper takes his time, the pitches are better of course. I remember being in Dublin and Jack being the manager and we were playing Spain and him coming out and the grass, it was after a rugby match, it was about three or four inches long and they were about to cut and he said No, No, don’t cut it, leave it. It will stop the ball for us.”

Apart from commentary work, Packie also works for UEFA in a role he describes as “coaching the coaches” - “I do a kind of consultancy work with UEFA, about 90 days work, and I travel around and do coaching education mainly.

“We have a new Goalkeeping Diploma for Professional Goalkeeping coaches so I have been heavily involved in that. But we have also been doing Shooter education, coaching the coaches, trying to get people who actually take on that role, coach educators as such, that’s not easy also, trying to find those people. “And if they are good at their job, they go off to work in Clubs and trying to maintain them within an Association is not easy. I was away in Moldova last week doing it with a group of guys, it was really good and it was really interesting for me.”

Looking back on the summer exploits in France, Packie was happy with Ireland’s performance and believes Martin O’Neill team are in a great position to qualify for the World Cup - “The European Championships, we didn’t let ourselves down for sure and when you come back from the European Championships and everybody feels quite happy that you’ve done the country proud, that’s what it is all about, that’s the main thing at the moment.”

As for the World Cup Qualification, Packie believes it is completely in Ireland’s hands - “Well, they have set themselves up now, they can only blow it now. There will be a period where they will have some tough enough matches where they have to get a result.

“But if you look at the group, Wales aren’t playing that well, they came off the European Championships on a high but it was always going to be tough for them to maintain it. Austria had a poor enough European Championships, they’ve obviously been struggling and it looks like the fans are against them a little bit.

“Serbia, we got that result away to them which, in my book, was a great result. People might say we should have beat them but they have momentum going now, they are the dark horses and they’ll be tough enough at home, they’ll be hard to beat at home but we are capable of beating them.

“So we are capable of beating everyone in this thing and we have our points in the bag. It is not easy going out to Moldova, it is never easy. The one away to Georgia will be a tough one, that’s the one that I would say if we can get past that one. I always look at the small countries, if you can pick up maximum points off them, the big games will take care of themselves.”

Locally, Sligo Rovers had a mixed 2016 but Packie sees great hope for the domestic scene in the performances of Dundalk - “Mixed season for Sligo Rovers but great to see Dundalk get so far and it would be great to see them get into the knockout stages. They have one game left and they have showed they can play good football too.

“Look, I go back to the days when Dundalk played Celtic away back in 1979 when it was up in Oriel Park and we should have went out in that game. That was a real battle, big strong men like Cathal Muckian, Dermot Keely and they played the game really, really hard.

“I was on the bench that night and only for that chance that was missed, we went on to play Real Madrid in the Quarter-Finals and that could have been Dundalk. So it is great see them back and getting their name, I travel around Europe and people are talking a little bit about Dundalk and what is happening.”

l See the Leitrim Observer over the coming weeks for more interviews with winners from the Leitrim Sport Star Awards.