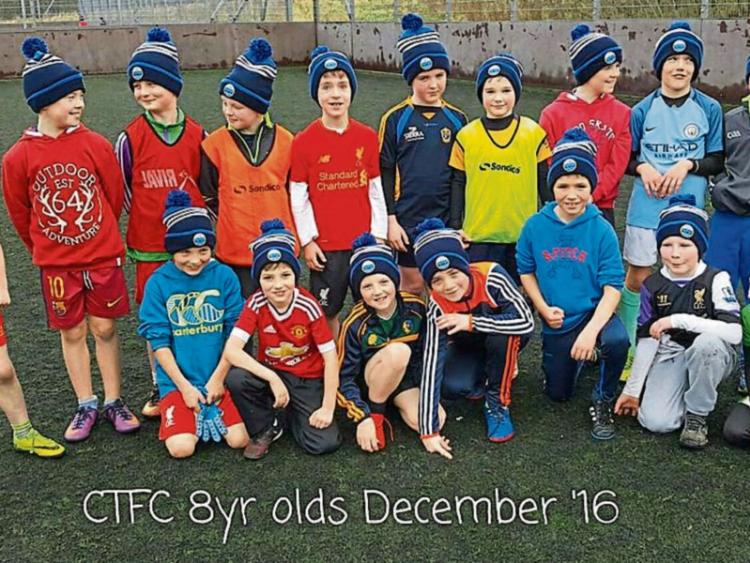 Pictured are some of the Carrick Town underage players who enjoyed their last training session before the Christmas break and were each given a Carick Town FC bobble hat.

Our senior side continued their impressive recent run making it six wins from the last seven games with a comfortable victory over Chaffpool United played under lights on Friday night at the Cleveragh Astro facility.

A superbly taken hat trick from striker Conor Silke and two clinical finishes from Ray Mulvey ensured the three points were secured. It was another superb all round team display with some excellent football played. The vast surrounds of the Cleveragh Astro suited Carrick's passing game and after a subdued early few minutes the Carrick lads soon found their feet and tore into the opposition with a display of power, speed and some superb flowing moves which resulted in plenty of goal scoring chances.

Michael Corrigan and Gerry Moore dominated the midfield battles while further upfield Liam McTiernan was providing some sublime touches to set up lots of chances.

Man of the match goes to the hat trick hero Conor Silke but it was another great all round team display and bodes well for the rest of the season as competition for starting spots intensifies.

This game completes the first half of the season as the league now splits into a top/bottom half format. We know that we will have to up our game considerably as the competition will increase dramatically in the second half of the season with 6 very strong sides competing for just two promotion spots over the course of 10 more fixtures each.

Sympathy: Everyone at Carrick Town FC would like to express their sympathies to our club chairman Gerard McGroarty on the passing of his mother, Mary Teresa McGroarty (Clonmany, Co. Donegal), may she rest in peace.