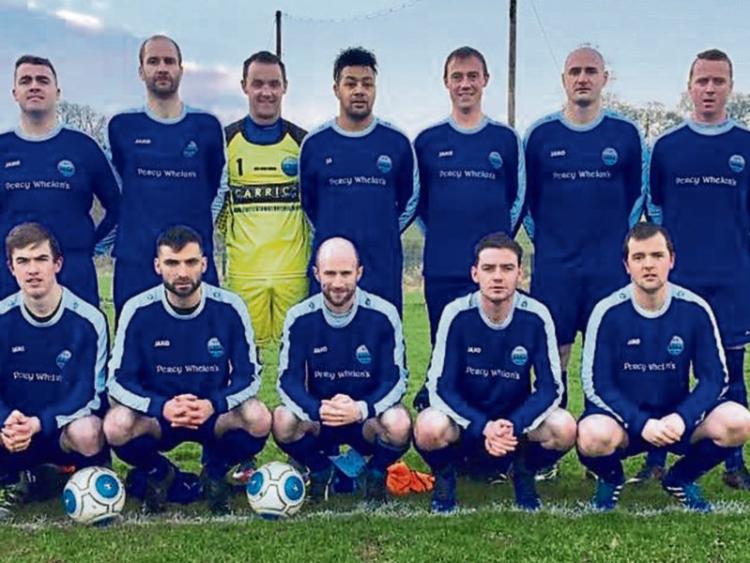 Carrick Town had a hard fought battle in difficult playing conditions in Riverstown on Sunday morning against a very well organised and disciplined Arrow Harps side in the Andrew Mullen Sligo Pallets Premier League.

After a scoreless first half which Carrick largely dominated, without creating too many clear cut chances, they deservedly took the lead early in the second half through Rodrigo Bouabida's well struck finish after some excellent build up play from Conor Shanley and Ray Mulvey.

Arrow Harps grew into the game after this and after a sustained period of pressure they eventually equalised with Daniel Willis scoring from the penalty spot with 15 minutes remaining for his 22nd goal of the season.

Arrow might have found the winner in the dying moments when they were awarded a highly contentious penalty but thankfully for the Carrick side the penalty was missed.

With so many players missing through injury and players not 100% fit it was in hindsight a well earned point at a venue that has never been kind to Carrick sides.

Next Sunday Carrick Town face Cliffoney Celtic at home in what is a vital game.

A return to winning ways is required if they are to remain in contention for the title. First team training continues Wednesday & Friday at Aura.

The Carrick Town U-14s unbeaten run came to an end last Saturday at Cleveragh Astro losing 3-0 to a well organised Ballymote team. The first half saw Carrick control the game playing some excellent football and were unlucky not to be ahead at half time.

Ballymote were much better after the break and opened the scoring in the 69th minute and 10 minutes later they doubled their advantage.

The Carrick lads never gave up and kept plugging away at Ballymote's solid defence.

With five minutes remaining and with Carrick pushing everyone forward Ballymote scored from a fast break up field.

Carrick Town remain in the running for a playoff place and hopefully the lads will put this loss behind them.