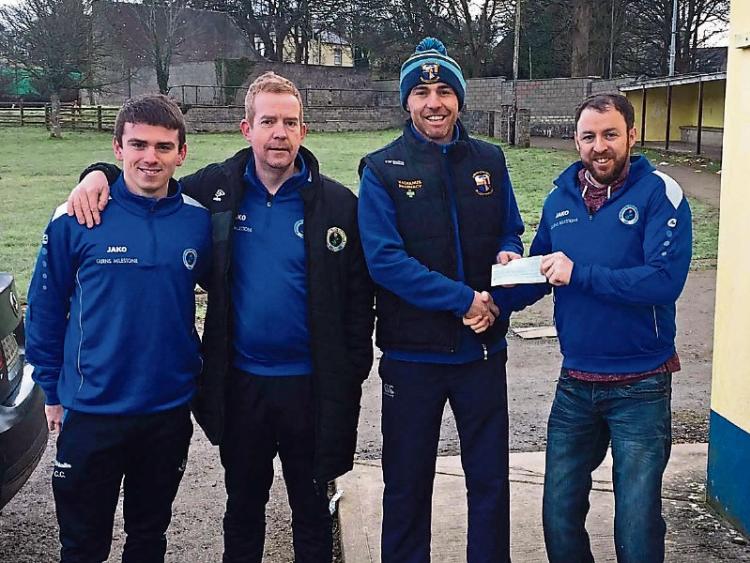 Pictured making a presentation to Glencar/Manorhamilton's Dominic Kelly on behalf of Manor Rangers are Colm Callinan, Dave Cummins and Sean Gallagher. Colm will represent Manor Rangers in 'The Kube'.

A hat-trick, for the second week in a row, from Niall Walsh helped Manor Rangers secure all three points against St Johns in the Bee Park last Sunday morning.

Manor were left reeling from the defeat at the hands of Carbury a week earlier and the hurt certainly showed as they produced probably the best 45 minutes of football played in the Bee Park all season in the first half, to get their season back on track.

Manor attacked from the first whistle and Walsh troubled St John's keeper Terry O’Malley latching on to a Brian McDonald cross but he headed just over the bar. Seamus Ryder fired a shot just wide of the post two minutes later as St John's struggled to get out of their half.

Manors pressure was rewarded when a long throw in from Brian McDonald was headed on firstly by Seamus Ryder and then by Alan Hickey into the path of Niall Walsh who fired the Leitrim lads ahead shooting low into the net.

Shortly afterwards, Walsh was unlucky not to score again when he was released by Colm Callinan but his shot went agonisingly wide.

St Johns' first attack of note saw Malachy Spratt force a full length save from Paul Scanlon to keep the Manor boys ahead.

Manor doubled their lead when Brian McDonald won a header in the centre circle which he sent forward into the path of Niall Walsh. His shot was parried by the keeper into the path of Seamus Ryder who used his knee to put Manor two goals clear.

Manor increased their lead further with another well worked team goal. Alan Hickey sent a pass out to the left wing where Walsh received possession before squaring to Seamus Ryder who in turn set up Brian McDonald who sent a shot sailing over O’Malley's head to give Manor a 3-0 lead.

With halftime approaching, Manor were caught napping when a ball was delivered over the top to Malachy Spratt who dispatched a shot to the net to reignite St Johns' interest in the contest.

Manor led by 3-1 at halftime and should have had at least two more goals such was their domination of possession.

Early in the second, Colm Callinan found himself in space having burst through the midfield but his goal bound shot was well saved by the keeper. Seamus Ryder came close with a shot fired wide.

The goal of the game came from a fine individual effort. Patrick Woulfe cleared the ball down the line to Niall Walsh on the halfway line. He took it down the wing beating two defenders before cutting in and shooting to the net for to re-establish Manor's three goal lead.

Manor increased their lead further with Alan Hickey sending the ball out to Anthony McDonald who crossed into the box. Colm Callinan headed the ball off the post and it fell to Niall Walsh who rifled the ball to the net for his second hat trick in two weeks.

St Johns started to find more room through the midfield and caused anxious moments on three occasions when breaking through with Spratt shooting just wide and then Brennan shaving the post. Paul Scanlon was incensed in the Manor goal and rightly so.

St Johns then capitalised on a poor clearance with Conor Brennan shooting to the net following a scrappy passage of play in the Manor box.

Manor Rangers were then reduced to 10 men when captain Alan Hickey was sent off having being given a second yellow card for a tackle which the referee deemed to be dangerous.

Manor lost their shape after that and St Johns scored again through Robert Fahy who shot to the net from a poor Manor clearance .

Despite being down to ten men Manor actually had some of the best chances of the whole game in the final ten minutes with Seamus Ryder, Niall Walsh and Adrian Croal all guilty of missing scoreable opportunities.