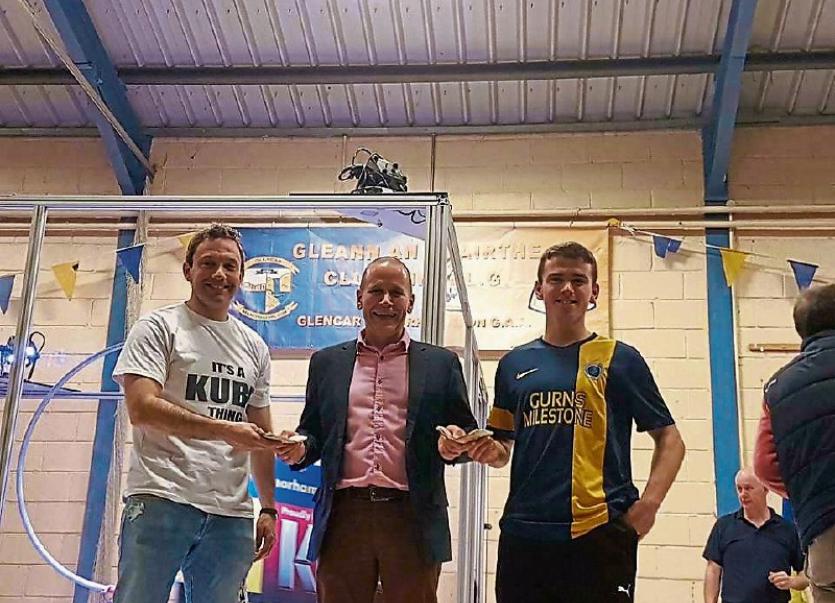 James Glancy and Colm Callinan are pictured with John Mullin at last Saturday's 'The Kube' fundraiser. James and Colm agreed that the €1,400 prize money be split between Glencar/Manor & Manor Rangers

Manor Rangers continued their recent run of good form when they comprehensively defeated Glenview Stars on Sunday morning last. Seamus Ryder was once again in top form, finishing the game with four goals while Colm Callinan scored twice and Niall Brady also found the net to ensure a comprehensive win for the Manor men when they travelled to Forthill. Gino O'Boyle netted a late consolation for Glenview when he scored direct from a free-kick.

Elsewhere in the Great Southern Hotel Sligo Super League leaders Carbury were made to work hard for a 1-0 win against Yeats Utd while Strand Celtic continue to keep the pressure on with a 2-0 win away to St Johns. Ballisodare Utd were 1-0 winners against relegation threatened Aughanagh and Calry Bohs emerged 3-2 winners against Ballymote.

U14: The U14s were beaten 4-0 by a strong Merville team. The first half was very even with Merville going in 1-0 up at half time. Merville pulled away in the second half but the Manor team didn't give up and had chances through Muireann Devaney.
U14 Girls: The U14 Girls enjoyed a victory over Calry Bohs at Hazelwood. Manor Rangers that led 2-1 at half time thanks to goals from Erin Somers and Muireann Devaney. There were plenty more goals in the second half as the Manor players extended their lead to eventually run out 7-3 winners. There was a hat trick for Muireann Devaney and goals from Erin Somers and Emily Conlon. Great effort by the whole squad.