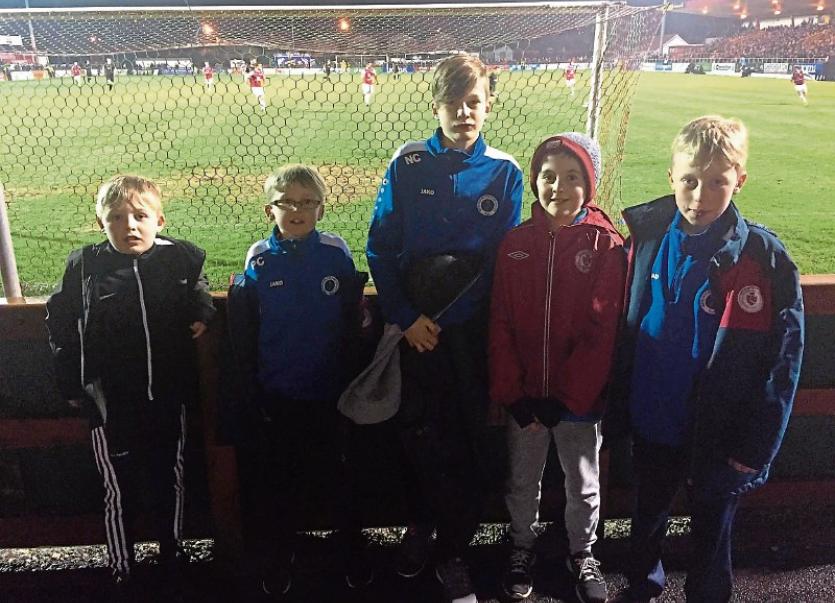 Five young Manor Rangers players were in supporting Sligo Rovers on Saturday night as they took on reigning champions Dundalk in the second round of the SSE Airtricity Premier Division. Unfortunately,

Manor Rangers progressed through to the third round of the TP Brennan Connacht Junior Cup on Sunday last following an impressive win over a strong Westport United at IT Sligo.

A Niall Walsh brace put the 'home' side into a two goal lead with 26 minutes played. Strikes from Danny Scahill and PJ Calvey saw the Mayo Super League side scrape their way back into this last 32 tie.

However a more clinical Manor broke away in the second half, netting three without reply courtesy of further goals from Brian McDonald, Patrick Woulfe and a third from the boot of the rampant Walsh.

Westport had enjoyed a relatively straight forward passage through from the first round in February following a 4-0 win over fellow countymen Conn Rangers.

But it was clear from the start that they were not to have things their own way as the north Leitrim side began the brighter, Colm Callinan & Seamus Ryder's both going close in the opening moments.

Manor deservedly hit the lead on the quarter hour. Darren Browne fouled Brian McDonald out wide on the right and Woulfe's whipped free-kick was guided past keeper Gary Cunningham with a powerful header from Walsh at the back post.

Cunningham kept his side alive with a smart save to deny Walsh two minutes later but he wasn't as fortunate on 26. The hungry Woulfe sniffed out the lively Walsh who saw his effort take a touch off Cunningham's wrist before making its way into the bottom corner for Walsh's and Manor's second.

The Sligo/Leitrim outfit switched off at the back just three minutes later as John Brennan's side profited from Colm Keane's free kick from the right. The ball breaking loose at the front post where the loose Scahill was on hand to plunge into an empty net.

This heralded a strong spell from Westport. Darren Browne was denied by Paul Scanlon in the Manor nets on the half hour. While Callinan headed David Cameron's looping corner off his own line seconds later.

Calvey pounced to level the game on 32. The striker greeting James O'Donnell's set piece from the right with a cushioned header which nestled in the bottom corner of Scanlon's net to leave the game level at the interval.

Ryder and Brian McDonald both rattled the Westport crossbar inside the opening eleven minutes of the second period before Cameron did similar for the Mayo men on 67. His low drive bounced back off the butt of Scanlon's post with both teams looking to gain the advantage.

But it was a spirited Rangers who eventually broke away on 71. Woulfe's long ball up the Manor left was perfect for Brian McDonald to run on to. The former Leitrim GAA man moved inside as he gauged the angle, placing the ball past the stranded Cunningham.

Three became four on 76 as the impressive Woulfe grabbed a goal of his own, getting to the end of a knock on at the front post by the bustling Callinan from a Brian McDonald throw-in to finish from close range.

Manor's progression to the last 16 was confirmed six minutes from time. Substitute Daniel Skimmin's initial effort was parried into the path of Walsh who netted unchallenged into a now vacant goal with Cunningham grounded, for a superb hat-trick.