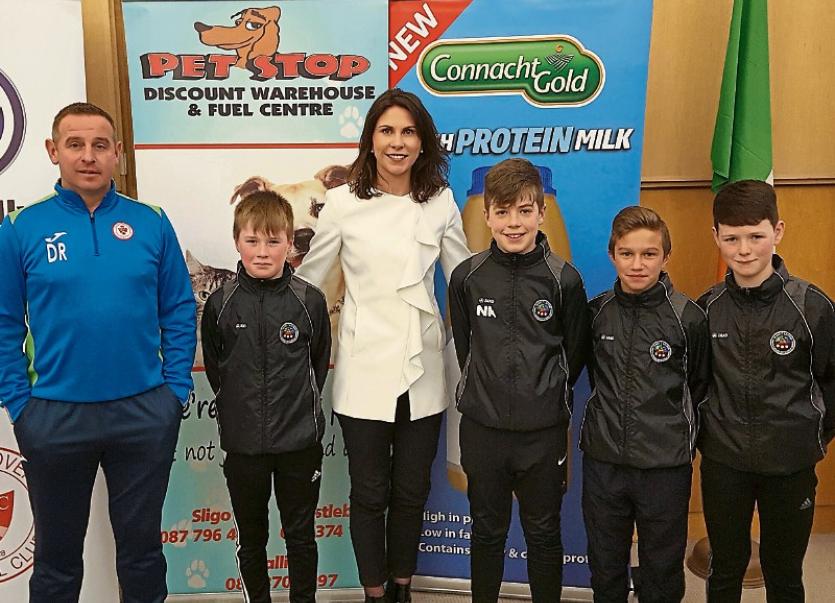 Niall Holahan (fourth from left) pictured with his team-mates at the launch of the Sligo Super Cup. Also included are Sligo Rovers’ manager, Dave Robertson and Karen McGarty, Connacht Gold

It will be a dream come true for talented young Carrick-on-Shannon footballer Niall Holahan when he leads out the Sligo/Leitrim U12 team to face mighty Celtic at Sligo Showgrounds in the side’s glamour opening game in the prestigious Sligo Super Cup on April 28.

Niall will lead a squad of 16 elite players drawn from the Sligo/Leitrim youth leagues in the three day festival of underage football. And he’ll be joined by his Carrick teammate Gerard Murtagh on the Sligo Leitrim side.

The two Carrick Town lads attended the official launch of the tournament at Sligo City Hall on Friday evening.

Sligo Leitrim will also face Linfield FC from Belfast and the highly rated Dublin District Schoolboys League in what promises to be a tough opening group.

The tournament, which has Sligo Pet Stop as its main sponsor, runs at The Showgrounds from April 28-30.