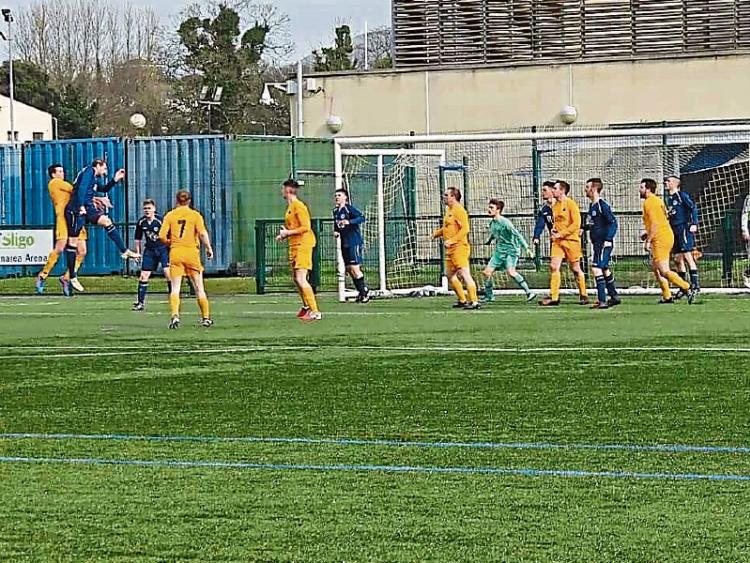 Two goals from Seamus Ryder followed by the opener from Paddy Woulfe helped secure all three points for Manor Rangers on Sunday last when they met Calry Bohs.

Manor had the better of the first half chances with Seamus Ryder, Niall Walsh, Adrian Croal and Alan Hickey all unlucky not to open the scoring.

Having had a relatively quiet opening half, Manor goalkeeper Paul Scanlon had to be at his best to react quickly and make a point blank save.

Manor deservedly took the lead with almost 25 minutes of the second half played. Brian McDonald's excellent cross was matched by a wonderful header from Paddy Woulfe which left Calry goalkeeper Aaron Flynn with no chance.

Manor's dominance was reflected on the scoreline when they doubled their lead six minutes later with a move that began with goalkeeper Paul Scanlon who released Paddy Woulfe.

The tricky midfielder in turn released Seamus Ryder who got the better of Calry's Eoin Nicholson before dispatching his shot past the goalkeeper and into the net.

The points were almost secured shortly afterwards but Robbie Cunningham was unlucky to see his effort come back off the upright.

The wait for a decisive third goal didn't last much longer as Ryder made sure of victory with a diving header to the net following a fine delivery from Alan Hickey.