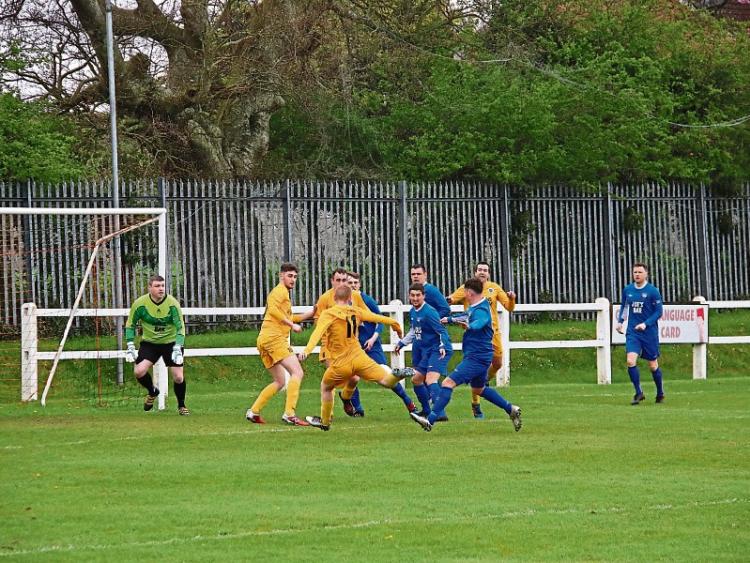 Manor Rangers exited the Connacht Cup at the quarter final stage on Easter Sunday when they suffered a heavy defeat at the hands of Ballinasloe Town.

Two goals in either half were enough to end Manor Rangers’ interest in the TP Brennan Connacht Cup as Ballinasloe deservedly claimed their place in the last four of the competition.

Manor, who recorded a comprehensive win over Ballinasloe last year in the FAI Junior Cup, started brightly and had the first sight of goal in the seventh minute when Brian McDonald’s long throw caused some panic in the Ballinasloe defence.

The ball was first headed on by Seamus Ryder and then Alan Hickey before the ball fell kindly for Paddy Woulfe. Unfortunately for Manor Woulfe’s target blazed over the Ballinasloe bar.

Four minutes later Ballinasloe had a sight of the Manor Rangers but Shane Duffy’s failed to trouble Paul Scanlon.

That miss was soon forgotten as the home side took the lead when Niall Walsh was penalised for a foul inside the box on David Grehan and Eoin McCormack dispatched the resulting spot kick past Scanlon.

Ballinasloe grew in confidence from the opening goal and looked immediately to double their advantage.

Paul Scanlon made a fine save to keep out Shane Duffy’s well struck free kick while Eoin McCormack blasted a shot over the bar with the goal at his mercy.

Having soaked up plenty of pressure Manor came very close to forcing an equaliser against the run of play. A dangerous delivery from Anthony McDonald was met brilliantly by Seamus Ryder but he was denied by an excellent save from Ballinasloe goalkeeper Padraic Maloney.

Another dangerous delivery from Anthony McDonald moments later once again caused panic in the Ballinasloe defence but no Manor player was able to take advantage.

Those chances provided Manor with their best period of pressure of the opening half but the failure to capitalise on those chances was to prove costly as Ballinasloe regained the initiative as they finished the first half strongly.

Paul Scanlon made a wonderful save to deny Duffy after he had weaved his way past several Manor defenders and into the box.

However, the next attack of note saw Ballinasloe double their advantage with 12 minutes of the half remaining. David Cullen's free kick was met by Joe Woods who steered his header past Scanlon.

Manor had one final chance before the interval but again they were denied by the Ballinasloe goalkeeper. Brian McDonald's corner was headed powerfully goalwards by Alan Hickey but Padraic Maloney was on hand to make another fine save.

Manor knew that they had it all to do as the second half got underway but it was Ballinasloe who continued to carry more of a goal threat.

Eoin McCormack was narrowly wide with an effort in the early stages of the second half but that miss was soon forgotten as McCormack struck for his second and Ballinasloe's third goal of the game, 20 minutes after the restart. Manor goalkeeper Paul Scanlon was powerless to prevent the long range free kick flying past him and into the goal.

A miserable afternoon for Manor was compounded when Ballinasloe struck for their fourth goal of the afternoon with a little over a quarter of an hour remaining.

Niall Walsh was dispossessed by David Cullen and the ball was then played to Eoin McCormack who lobbed Scanlon from 40 yards to complete his hat-trick and an emphatic victory for the home side.

It proved to be a disappointing day at the office for Manor Rangers but despite the disappointment of Sunday's result, there is still plenty to play for locally and Manor will be hoping to finish the season on a high.