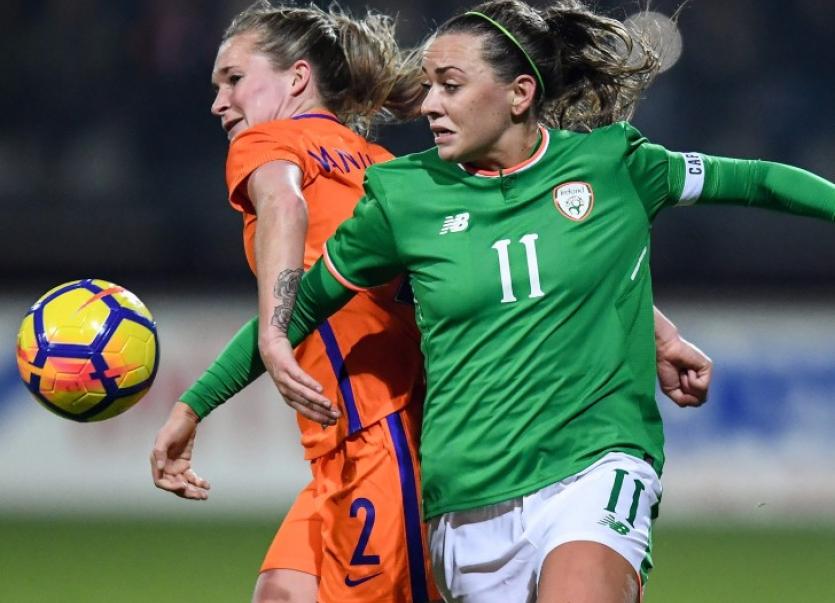 Dearbhaile Beirne was a member of the Ireland squad that shocked the European champions, Netherlands, last night as they recorded one of their finest results to remain unbeaten and on course for the 2019 FIFA Women's World Cup.

Colin Bell's team produced an incredible performance to shackle their hosts and remain unbeaten in their qualifying group for Women's World Cup.

In a game that reached over 50,000 on FAI channels due to eir Sport's broadcast, a Facebook LIVE stream and excellent online coverage, the Ireland players won many new supporters due to their courageous display.

Bell said afterwards, "I cannot praise the players enough. They put their bodies on the line for every second of the game and got an incredible result.

"We're in this campaign now. We've played three away games and got seven points which was the target. We're going to be battling every step of the way during this campaign and this is a huge moment for the players."

While the Netherlands attacked throughout, they also found themselves on the back foot early on. Amber Barrett could have broken the deadlock inside two minutes when she raced onto a through ball but the Peamount United striker could not convert.

Barrett, who was recently named as the 2017 Continental Tyres Women's National League Player of the Year, found herself in position on another two occasions to possibly shock the home team but her efforts did not rustle the back of the net.

The hosts, who were playing in front of a 12,000-strong sold out crowd, were given an early wake-up call through Barrett's efforts and they struggled to find a way past Ireland's rearguard, who worked tirelessly throughout.

Even when they thought that they had scored from set-pieces, Tyler Toland - only 16 years old - was in the right place to clear off the line on two occasions. It was that sort of discipline and work ethic that drove the Ireland team on.

Arsenal striker Vivianne Miedema was a constant threat and rattled the woodwork with an effort before the interval. While Ireland goalkeeper Marie Hourihan pulled off a superb save on a night when she truly impressed.

Substitute Leanne Kiernan had a chance of setting up a winning goal when she sprinted clear of her marker and connected with a pass from Denise O'Sullivan but she could not link back up with her team-mate when inside the penalty area.

With victories away to Northern Ireland and Slovakia already secured, this historic draw keeps Ireland firmly in the hunt for a place the 2019 Women's World Cup.

Next up is a double header against Slovakia and Netherlands in April 2018 at home - games which all 2017/18 FAI Season Ticket holders can avail of free entry to.