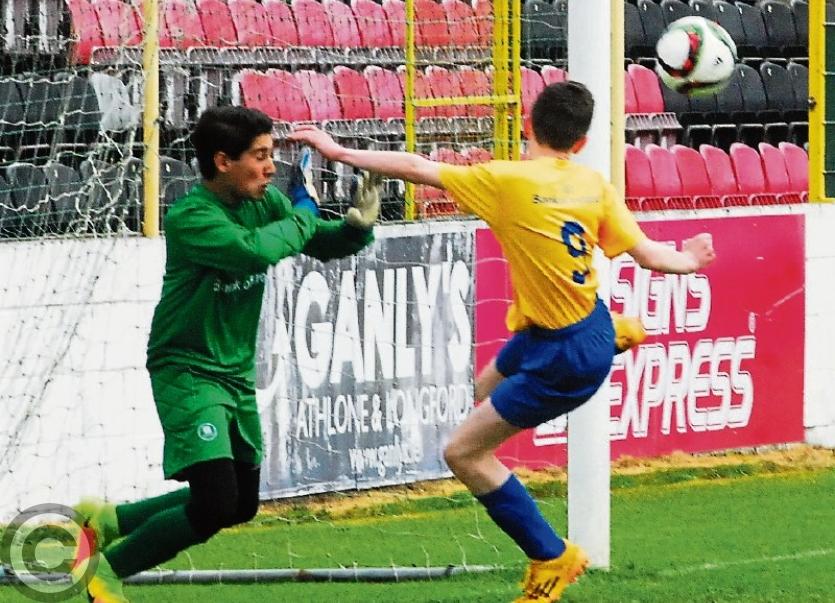 Diarmuid Giblin tries to get his foot to the ball to force home a St. Clare's goal ahead of Dublin Oak Academy keeper Oscar Almaraz in the All-Ireland Final. Photo by Willie Donnellan

The year may have ended with a bitterly disappointing penalty shoot-out defeat in the Al-Ireland Final but there was much for the St Clare's CS first years to be proud of as they produced some excellent displays on their march to the decider.

For the Connacht Final St Clare's travelled to Castlebar where they faced Seamount College, Kinvara in what proved to be an absorbing contest.

St Clare's bossed matters in terms of possession and chances created but they found it difficult to get the better of a well organised Seamount defence.

Deep in injury time and with the game still scoreless it was looking as though a penalty shoot-out would be necessary to separate the sides.

However, there was to be late, late drama as Patrick Montgomery took full advantage of good link-up play involving Tarach Ó Snodaigh and Eanna Clancy and he applied a cool finish as he slotted the ball low past the Seamount goalkeeper to secure a dramatic but deserved win for St Clare's.

Next up for St Clare's was the All-Ireland semi-final against Mulroy College Milford in Gortakeegan, Monaghan.

Under the guidance of Anthony McDonald St Clare's took the game to their opponents from the opening whistle and emerged comprehensive winners on a 8-2 scoreline but the result was less straightforward than that scoreline would suggest as the Manorhamilton school twice came from behind to lead 3-2 at half-time.

First half goals from Diarmuid Giblin and Eanna Clancy cancelled out Mulroy College's goals before Patrick Montgomery struck before the interval to give St Clare's the lead for the first time.

The second half saw St Clare's boss matters and took complete control of the game. Patrick Montgomery finished the game with four goals while Diarmuid Giblin netted twice in what was an excellent team performance.

The All-Ireland Final proved to be an occasion to remember for all present although unfortunately the result didn't go according to plan from a St Clare's point of view.

A pulsating final against Dublin Oak Academy, played at Longford Town's City Calling Stadium ended in agony for St Clare's as they were to be denied All-Ireland glory but only after a rip-roaring contest and a dramatic penalty shoot-out.

The opening stages saw St Clare’s settle to the task hand quicker with Matthew Connolly testing the DOA defence with a dangerous free which was cleared for an early corner.

DOA broke the deadlock after Shane Conlon initially made a fine save but he was powerless to prevent Marcel Toriello from forcing the rebound to the unguarded net.

Barry McNulty's pinpoint delivery from the left was met perfectly by Patrick Montgomery with the outside of his outstretched right boot to divert the ball to the DOA goal and force the game to extra-time.

Extra-time failed to produce any further goals meaning the game was decided by a penalty shoot-out.

With both sides cheered on passionately by their supporters the finale was as dramatic as you could imagine and it was unfortunate St Clare's heroics were not to be rewarded as they suffered a 6-5 defeat in the dreaded shoot-out.