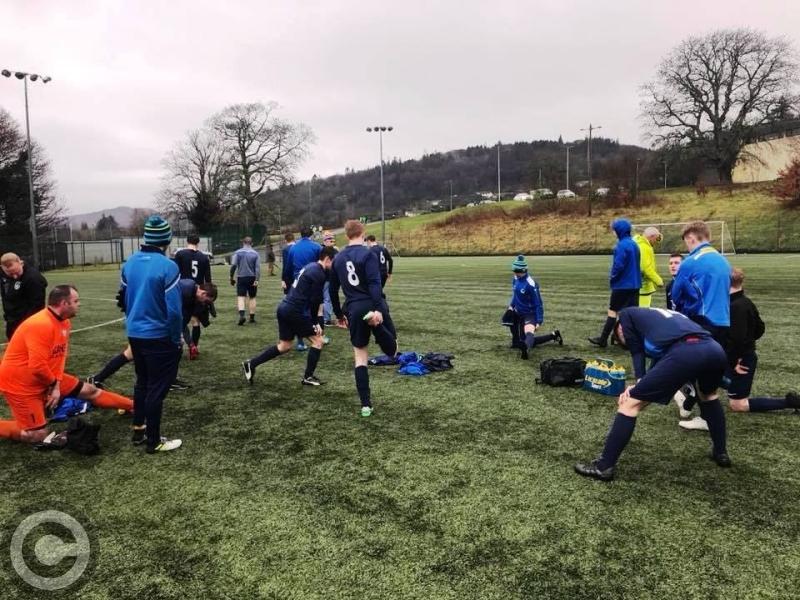 Manor Rangers maintained their challenge in the Sligo Southern Super League with a narrow victory over Ballymote Celtic in a nine goal thriller in Cleveragh last Sunday.

Ballymote Celtic moved their game to the Astro pitch at Cleveragh and what a game it proved to be. Ballymote Celtic took the lead after five minutes Dessie Flynn rocking the Manor goals.

Manor Rangers bounced ten minutes later with Niall Walsh levelling the scores but the tit for tat nature continued as Jack Hever put Ballymote Celtic ahead once again on 30 minutes only for Manor to hit back immediately with Niall Walsh scoring his second.

Again, five minutes before the break, Ballymote went in front when Mark Irwin netted his 12th league goal of the season. But again, Manor Rangers hit back with a goal from Seamus Ryder to leave the scores tied at 3-3 apiece at the break.

Manor, however, suffered a major blow on the stroke of half time when referee Ray Flynn gave Niall Walsh, on for a hat-trick, his marching orders that left his team at a big disadvantage for the second half.

Ballymote Celtic, on 65 minutes, went in front with Dessie Flynn but Manor refused to lie down and levelled with 17 minutes to go when Vincent Sweeney crashed home the equaliser. Ten minutes from time, former Leitrim GAA star Brian McDonald fired home a cracker of a goal to give all three points to the Manor boys in this nine-goal thriller.

Carbury edged closer to the league leaders in the Sligo Southern Super League with a devastating display against a young St John’s team. Ibrahim Savage bagged four goals to bring his league tally to 17 in ten games.

Barry O’Mahoney and Steve Feeney each scored once in a game dominated by Carbury.

Aughanagh Celtic welcomed Calry Bohs to Ballinafad and the sides shared the points in a scoreless draw.

In the Andrew Mullen Premier League, MCR lead the way while Cliffoney Celtic are in second after a hard-fought victory at home to the vastly improved Chaffpool United. Alan Harrison put Cliffoney ahead on 20 minutes and they increased their lead 16 minutes from time when Jason Brennan fired home.

That proved crucial as the Pool, with their never say die attitud,e struck minutes from time with a superb goal from Criostoir Davey and were somewhat unlucky not to have taken something from this game.

Gurteen Celtic, bottom of the Premier League, moved their fixture to the IT Sligo to take on high flying Cartron United. Gurteen Celtic opened at a fast pace and were rewarded on 20 minutes when Ross O’Dowd fired home a glorious goal.

Gurteen looked to be heading for their first win of the season but Cartron struck at the death when referee Terry Butler had no option but to dismiss James Williams for a deliberate handball and the resulting penalty was dispatched by Sean Condron.

This was a great game of football and full credit to both sides but a special word of praise to Gurteen Celtic for competing despite the results and what a great point to take today.

Glenview Stars welcomed Coolaney United to Forthill and Keith Carty was on fire hitting four goals, aided and abetted with a double from the evergreen Glen Shannon. Coolaney, despite the scoreline, was as competitive as ever with Declan McCormack and Joe Kilcullen each scoring.

Benbulben FC welcomed Real Tubber to Grange with just two places separating the clubs on the leaderboard. The first half was a baptism of fire for this young side with Real Tubber running riot and leading by three goals to nil at half time courtesy of a double strike from Peter Wynne and a third from Eoin Walsh.

However, Benbulben settled well into the second half with Aaron Mc Elligott having a superb game in the Benbulben goals. Paddy Watters scored twice to bring Benbulben within a goal of Real Tubber but despite their heroics, Real Tubber had in Eoin Walsh a match winner of their own who scored his second to keep their heads in front.

Ten minutes from time and an own goal gave Benbulben some hope but the Real Tubber stood solid to take all three points by the odd goal in seven.

Merville United, flying high in the Premier League, were at home to Mayo side Achill Rovers. Leading scorer Ryan McManus opened the account for Merville with a brilliant strike, Graham Irwin added the second and Jordan Harte added the third.

Merville now face a trip to Castlebar Celtic on March 11, and Renmore will welcome Carbury FC in the Quarter Finals of the T P Brennan Connacht Cup.

Real Tubber are a home on Sunday March 4, against West Coast United in their T P Brennan Shield Quarter Final.