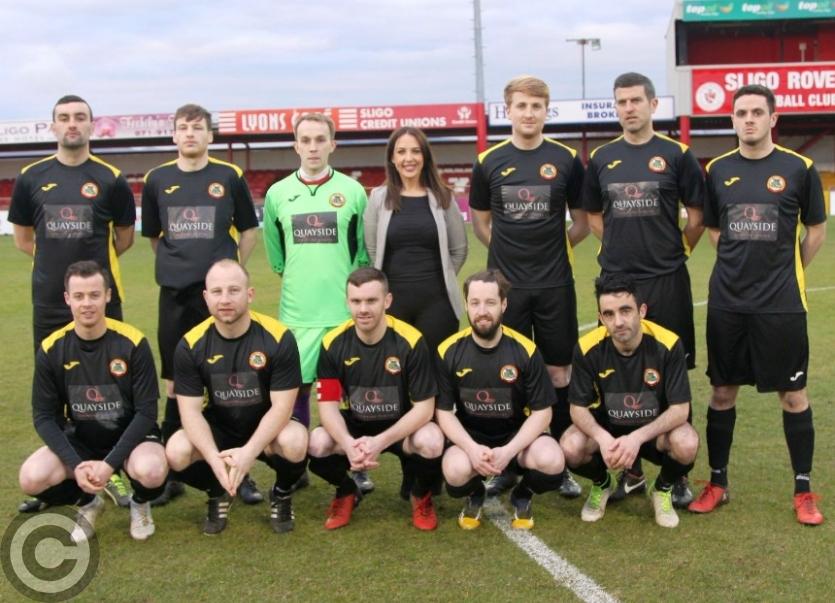 Sligo-Leitrim DSL are through to the semi-finals of the FAI Oscar Traynor Cup after they defeated Kerry 2-1 on Good Friday at The Showgrounds.

A well-contested first-half ended scoreless with Sligo-Leitrim the dominant side. An own goal gave Kerry the lead eight minutes into the second-half. With ten minutes left, Sligo Leitrim equalised when Conor Griffin scored with a powerful header from a corner.

In the third minute of added time Steve Feeney played a long ball up field that Ibrahim Savage controlled beautifully and he played a precision pass into Mark McGoldrick who drifted to the right before angling a superb effort into the bottom left hand corner of the Kerry goals given keeper Brian O Connor no chance.

Sligo-Leitrim will now play Carlow in the semi-final of the Oscar Traynor at the Institute of Technology Astro Pitch Tentative date is Saturday April 28, at 3pm.

In the Sligo Southern Hotel Super League, Ballymote Celtic won well against Ballisodare United, Robbie Flannery opening the account for the Ballymote Boys on 20 minutes, Colm Duffy with a second five minutes into the second half.

St John’s moved a little closer to safety with a four-nil victory at home to Calry Bohs. Jake Hargadon got St John’s off to a flyer netting after two minutes. Malachy Spratt hit their second on 20 minutes and Stephen Armstrong had St John’s three goals ahead eight minutes from half time.

The second half was a tame affair but Malachy Spratt hit his second goal of the day 12 minutes from time that wrapped up three precious points for St Johns.

The big derby clash saw Arrow Harps welcome neighbours Ballygawley Celtic to Riverstown and it was Arrow Harps who struck first after 16 minutes, John Paul Henry hitting a stinger of a free kick high into the roof of the Ballygawley net from 40 yards.

Ballygawley responded ten minutes after the break with a fine goal from James Mackey but Harps had the final say when Seamus Hailstones scored twice in a matter of minutes to leave Arrow Harps home and dry in this encounter.

The Andrew Mullen Premier League continues its amazing drama. League leaders MCR were at home in Sean Fallon Park Cranmore to visitors Chaffpool United. Ciaran Harvey opened the account for MCR but the Pool held MCR to just a one goal lead at half time.

This was three great points for MCR but make no mistake Chaffpool United were never far away.

The next massive game was unfolding at Mullaghmore where Cliffoney Celtic welcomed high flying Merville United. A win for Cliffoney would keep them in the race and blow open the race for the title but could they match the fire power of Merville.

Merville still control their own destiny but the Premier League has a lot of talent and with no easy games, it is still all to play for.

Benbulben scored once through Bartosz Slowinski but the day and the points all belonged to Stars and manager Gino O’Boyle who has them firing on all cylinders.

Cartron United bounced back to winning ways at home to Coolaney United at the IT Sligo, Kevin Buckley hitting a hat trick and a goal each from Ali Alniyadi, Colin Feehily and Wesley M Gowan fencing off three massive points for Cartron.

Despite the goal difference Coolaney United played exceptionally well and were rewarded with a goal each from Joe Kilcullen and Ciaran McMurray.