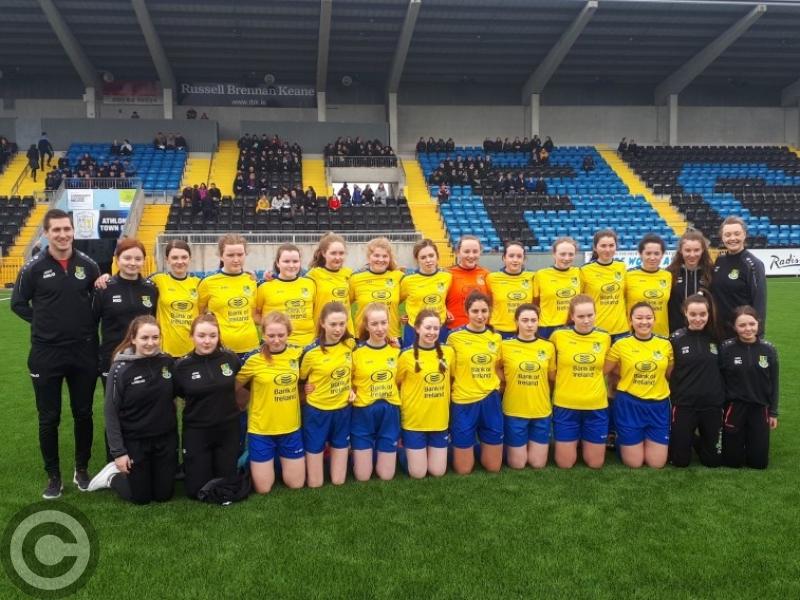 St. Clare's bid to bring home the SFAI Girls National Junior B Cup ended in heartbreak in Athlone Town Stadium on Wednesday afternoon when Presentation Killina proved too good on the day.

A goal in the first minute got the Offaly school off to a perfect start and a second from the penalty spot gave them a cushion that a determined and brave effort from St. Clare's couldn't overcome.

St. Clare's did pull back a goal from Muireann Devaney in the second half but a breakaway goal and the intervention of the woodwork prevented the Manorhamilton school from closing the gap on their Tullamore opponents.

The early stages of the game saw Presentation Killina take a very early lead when Ava Dolan struck for a goal for the Offaly school in the very first minute giving them a dream start to the final.

Killina took command of the game when Becky Watkins scored from a penalty 27 minutes into the second half to establish a two goal lead.

St. Clare's threatened on occasions in the first half but couldn't make the breakthrough as they trailed 2-0 at the halftime interval. Irish underage international Muireann Devaney gave the Manor girls a beacon of light when she found the net six minutes into the second half with a superb individual goal.

Three minutes later, Devaney went close with a long range effort that flew over the crossbar but unfortunately, St Clare's were unable to grab the equaliser they so desperately needed and despite a period of sustained pressure, 31 minutes into the second half, Killina struck for a goal from Sarah Doyle against the run of play to restore their two goal advantage.

St Clare's kept battling and keeper Niamh Loughlin made a brilliant save to deny Watkins a second goal from close range while Devaney too was denied a second goal a minute later when her shot came crashing back off the woodwork with time almost up.

FULL REPORT, PICTURES AND ANALYSIS IN NEXT WEDNESDAY'S LEITRIM OBSERVER