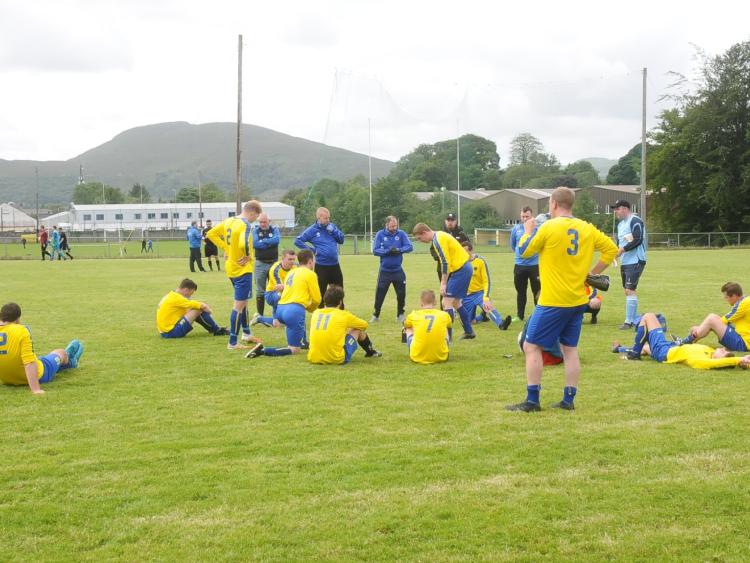 Manor Rangers players pictured after their draw in the League with Carbury Picture: Willie Donnellan

Manor Rangers put their frustrations at drawing with Carbury last Sunday in a top of the table clash well behind them as they defeated Ballisodare United away from home to qualify for the final of the Glasshouse Hotel Cup.

Manor Rangers manager Thomas McDonald had vowed to keep on fighting (Link) after his team drew 1-1 with Carbury FC last Sunday in Bee Park (Report) and aimed for Cup glory and they achieved that with a 2-1 away to Ballisodare. The victory leaves them in line to face Carbury or Cartron United in the final.

The north Leitrim men now face a glut of games in the coming weeks with a home and away double header with MCR next up. They host the Sligo town team in Bee Park this Sunday at 11 am before travelling to Sligo to take on MCR next Wednesday (7pm kickoff).

The following Sunday, August 2, Manor travel to face Cartron before another journey to Strandhill on Wednesday August 5, when they take on Strand Celtic. Another visit follows on Sunday August 9, with a trip to Merville in what is their final league game of the season.

Unfortunately, Manor Rangers will have to wait to see if Carbury slip up in the Sligo Southern Hotel League as the Sligo team, one point behind in the table but with a game in hand, are in Cup action next Sunday and Wednesday meaning that they will not finish their League programme until Sunday, August 23.

Should they qualify for the final, it could mean the Glasshouse Hotel Cup Final won't be played until the end of August.